Apple has been at the center of several controversies in recent times. These issues usually land the company in court. The latest of these complaints is on the Apple App Store. Recently, a developer filed a lawsuit in the Santa Clara County Court of California, accusing the Apple App Store of false advertising, fake rating, unfair competition, violation of developer agreements, and other violations.

The developer, Kosta Eleftheriou, said in the complaint that “The Apple App Store has made billions of dollars in profits at the expense of small applications and the interests of developers“.

The Apple App Store is the company’s second-largest source of revenue, second only to the iPhone business. According to reports, the App Store in 2020 created about $64 billion in revenue, an increase of 28% compared to 2019. Prior to this, the App Store has been criticized for the 30% Apple tax.

Piracy of apps are rampant – Apple is doing nothing

FlickType is a keyboard app for iPhone and Apple Watch. It supports users to use gestures for quick input on the small screen of the Apple Watch. In January 2019, Eleftheriou (FlickType founder) met with Apple executive Randy Marsden to negotiate the acquisition of FlickType. However, it was not until a year later that FlickType was approved for listing on the APP Store.

According to Eleftheriou, Apple claims that its refusal for approval is because “full keyboard applications are not suitable for Apple Watch”. Thus, the negotiations between the two parties did not progress. However, the likes of Instagram, WhatsApp, Twitter, and Reddit all have approval for the Apple App Store. The interesting thing is that they all use FlickType keyboards. 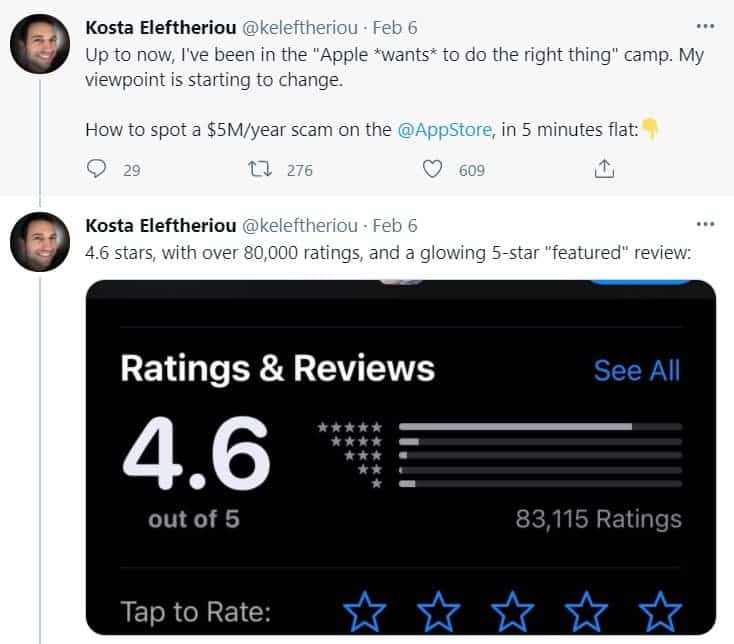 Regarding this matter, Eleftheriou believes that Apple is deliberately delaying time in order to keep the selling price as low as possible. Because there is no definite evidence, he did not file a lawsuit against Apple.

In January 2020, FlickType was launched on the App Store, and it didn’t take long for it to become the most popular paid application. However, with the increasing popularity of FlickType downloads, a large number of pirated apps similar to FlickType appeared in the APP Store.

Eleftheriou found that these pirated apps buy user reviews and stars to improve their ranking in the App Store.

According to Eleftheriou, this is not a surprise. He claims that Apple App Store fraud has been happening, and the app evaluation system has been very bad. After receiving Eleftheriou’s feedback, Apple immediately dealt with it, but it apparently did not completely curb this phenomenon.

As Eleftheriou said, a pirated program called KeyWatch is still in the APP Store. In addition to purchasing rankings, it even uses FlickType promotional videos. These pirated apps have brought huge economic losses to FlickType. KeyWatch charges users $8 a week, and the cumulative annual amount exceeds $2 million.

caused by the delay in launching and pirated apps.

Next Google will create at least 10,000 full-time jobs this year - see if you have a chance