We’re ending the first quarter of 2021 and many companies already unveiled a bunch of new products. For the second quarter, we’re also expecting new exciting products to fill the technology segment. Among the new products, we’re expecting the Mi Band 6. Xiaomi’s popular fitness tracker is about to enter the 6th generation, and according to several leaks, the new band will bring some of the greatest upgrades in its story. A couple of days ago, information emerged stating that users will be able to answer WhatsApp and Telegram straight from the wearable. Now a couple of images appeared revealed the Mi Band 6 and Mi Smart Band 6. It has confirmed the look and magnetic charger of the fitness tracker. 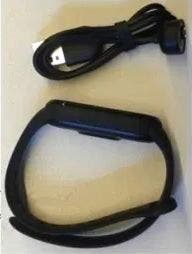 The Mi Band 6 appeared with model number XMSH15HM and carries Huami’s name. This isn’t a surprise, after all, Xiaomi is a shareholder at Huami, and the giant of wearables is behind the manufacturing of Xiaomi’s smart bands. The leaked PDF files confirmed the design of the next wearable. In fact, it looks similar to the current Mi Band 5. We’re not seeing many design changes in the new product, but the specifications will be quite different. It will also bring back the magnetic charger, which basically buries the rumors about a standard USB-A charging port.

According to previous leaks, the Mi Band 6 will bring blood oxygen monitoring. It will also offer support for Amazon Alexa on the global variant and will come with 30 workout modes. Other reports indicate that it will pack built-in GPS and automatic replies for the app notifications. The Chinese version will get NFC for contactless payment. However, we’re not sure if this feature will make way to the international variant. It would be amazing to have an NFC-equipped Mi Band with support for the global cashless payment systems.

Unfortunately, the leaked image doesn’t show the screen size. However, many leaks claim that the next smart band will pack a bigger screen. The image reveals a Black color strap. However, we know that it will bring a plethora of additional colors. We expect more info to surface in the coming days. Although there is no confirmation for the launch date, many reports suggest a launch before June.

Previous It has just begun: Meizu to use Huawei's HMS Core service