The global market for camera sensors for smartphones reached $ 15 billion in 2020, an increase of 13% over 2019. This data exists in a report of experts from the analytical company Strategy Analytics.

Analysts have named the largest supplier of camera sensors for smartphones. At the end of the year, it continues to be Sony, which owns 46% of the market in monetary terms. Then we have Samsung System LSI and OmniVision Technologies. So, in total, the top three companies occupy almost 85% of the market. The diagram below gives an idea of ​​the market distribution:

The pandemic did little to dent the caùera sensor market growth as CIS vendors observed strong demand from smartphone OEMs who aggressively adopted high-resolution sensors and higher sensor count across smartphone tiers in 2020. Samsung, OmniVision and SK Hynix continued to take share from Sony; as the vendor lost key business owing to sanctions on Huawei. We expect Sony’s market dominance will be increasingly threatened by the rising competition in the smartphone camera sensor market. 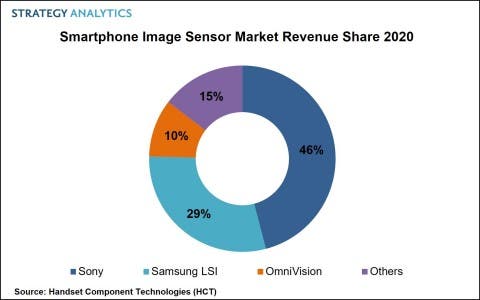 According to the latest research from Strategy Analytics; the global smartphone shipments will rebound +6.5% YoY to reach 1.38 billion units in 2021. The growth is driven mostly by the improved economic situation as the COVID-19 pandemic weakens; a growing stock of aging smartphones and the operator/vendor push for migration to 5G.

Abhilash Kumar, Smartphone Analyst at Strategy Analytics, said, “For 2021, we believe Xiaomi will emerge as the third largest global smartphone vendor surpassing Huawei. Also, Xiaomi has been performing well in the India and Russia markets, and has also been very aggressive in Central & Eastern Europe and Western Europe.”

Commenting on the regional outlook of the Chinese vendors, Linda Sui, Senior Director at Strategy Analytics: “2021 is going to be the year of Chinese smartphone vendors. In addition, in Asia Pacific, vivo, Xiaomi and OPPO will become top 3 players driven by aggressive marketing; expanding channel footprints and competitive pricing.”

The report also notes that in Africa & Middle East, Transsion will pass Samsung as the largest vendor with Samsung falling to second place. Also, Xiaomi will surge into third place ahead of Apple. In addition, in the Western European markets, Xiaomi will solidify its grip on third place after Apple and Samsung.

Next No Xiaomi Tablet On March 29, But Xiaomi Mi MIX Fold Should Be There