Realme unveiled its first 2021 flagship in the form of Realme GT this month. The device was released in China with a super attractive price starting at under $470 which was really impressive for a phone with the Snapdragon 888 chipset. While there is no confirmation about this phone’s release outside of China, the company is preparing a new variant dubbed Realme GT Neo. This is a toned-down version of the GT but that still brings excellent performance thanks to the Dimensity 1200 chipset. The device will be released on March 31 in China, and according to recent reports, will also reach other countries like India very soon. Today, Realme decided to disclose the phone design and also revealed some of its camera specs in the process. 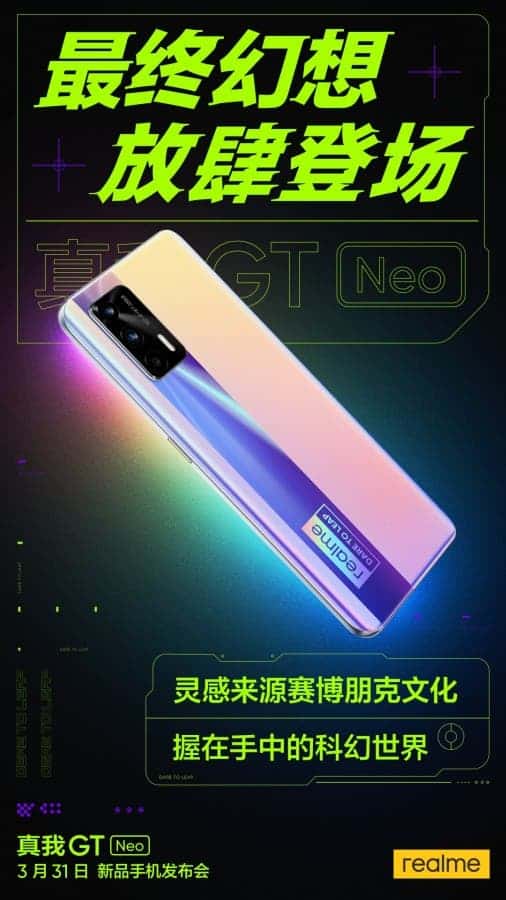 The Realme GT Neo, just like its sibling, will feature a triple-camera setup. The main camera is, once again, a 64MP shooter. The camera comes aligned with a shiny stripe that stretches across the rear panel’s length and has the Realme logo placed on it with the “Dare to Leap” logo. According to Realme, this is a “Box Logo” design. The brand further states that this is a tribute to the Cyberpunk culture since that’s the source of the design’s inspiration. Is this an indication of a partnership between Realme and CD Project Red’s recent game, Cyberpunk 2077? We’ll have to wait and see, but this isn’t the first time the game appears in the smartphone segment. Last year, OnePlus brought a stunning Cyberpunk 2077 edition of its OnePlus 8T. Maybe it’s just a coincidence, and the device is just using the original Cyberpunk genre.

Well, the name of this fancy color also brings me memories of another popular game. Realme is calling this particular color Final Fantasy, well this is machine translated from Chinese, so it may have a different name in the end. The back cover adopts a micron-level matte process, which is both rigid and soft and resistant to smudges, according to Realme.

The Realme GT Neo has the power key on its right-side frame and the volume rocker on the left. Since this is a regular power button, we assume that the fingerprint scanner is embedded in the screen. So, just like its sibling, the Realme GT Neo will pack an AMOLED panel. On the bottom, we have a USB-C port flanked by a speaker, microphone, and a 3.5mm headphone jack. We assume that the USB-C port will be ready to withstand 65W fast-charging rates.

Unfortunately, the company didn’t detail the remaining specs of the Realme GT Neo. However, we know that it will come with an appeal for gaming. After all, it will pack 4D vibrations, and a 3D tempered liquid cooling system consisting of stainless steel and copper to reduce the temperature by up to 15° C.

The company may keep bringing more details to keep the hype alive until the March 31st unveiling.

Next Xiaomi sold more than 10 Million premium smartphones in 2020