Xiaomi certainly has made its name in the globe as a smartphone maker. However, it’s much more than a simple smartphone maker when we take the Chinese market in consideration. It has a huge plethora of products in the most varied segments. On its domestic market company’s portfolio goes from electric bikes to electric shavers. Now there are even reports suggesting the company’s entrance in the automobile segment. The company has been investing a lot in the segment of Smart Home devices lately in a bid to build a solid ecosystem of products. Some of these products are slowly leaving the Chinese market like the Mi Smart Projector. The company has been selling its Smart Compact Projector for a few years in places like the United States. It offered Android TV 9.0 and was very convenient due to the small size. Today, the company has unveiled the Mi Smart Projector 2 Pro. It’s slightly bulkier but offers more features.

The Xiaomi Mi Smart Projector 2 is larger than the original model but can reach a much higher brightness of 1,300 ANSI lumens. The predecessor can’t even offer half this amount with a 500 ANSI lumens cap. The newer model has an output of 1,920 x 1,080 pixels (Full HD) resolution. It also offers HDR10 support and unidirectional auto-focus through its built-in ToF sensor. 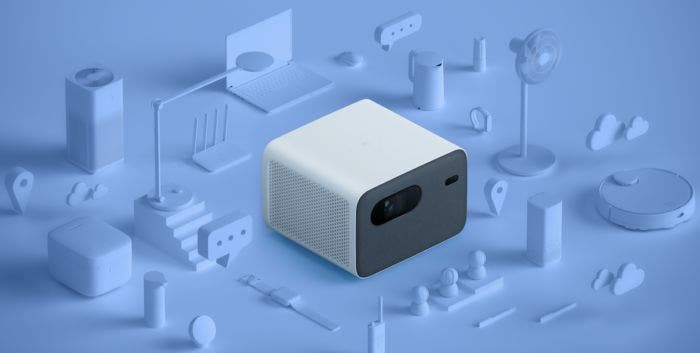 The Mi Smart Projector 2 also comes with an impressive sound system for its size. It packs dual 10W speakers with compatibility for DTS-HD and Dolby Audio. The projector can also be used as a standalone Bluetooth speaker. When you’re not watching movies or TV shows, you can still enjoy music without the projection lamp wasting the battery.

Like other smart projectors, the Smart Projector 2 Pro offers Android TV. It’s certified for use by Google, so the Google Play Store and other apps will work flawlessly as they do on other Android TV devices. With this projector, you can turn your wall in a huge Android TV. You can also use Google Cast to beam content to it as the Chromecast receiver app will be available. Interestingly, you can also send commands through Google Assistant. However, Xiaomi didn’t specify if the microphone will be on the remote or on the projector itself. It’s not clear what version of Android TV it will run out of the box.

According to the Chinese firm, the Mi Smart Projector 2 Pro will be available for €999 (with early pricing set at €899). This translates to about $1,117 if you’re in the United States, or INR 85,554 if you’re in India. That of course makes it a pretty expensive product. However, take in mind that there isn’t much competition in this particular segment. Other smart projects offer much lower brightness and aren’t Android TV certified.

For now, it’s exclusively available in China just like the other Mi 11 smartphones released today.

Previous OnePlus Nord SE has been canceled after all, Nord 2 to come with Snapdragon 780G

Next Xiaomi Mi Band 6 Vs Honor Band 6 - Which should you consider?