ARM announced earlier today its new ARMv9 architecture for processors. The new architecture that comes to succeed the one-decade-predominant ARMv8 standard comes with a focus on artificial intelligence and security. We expect many companies such as Qualcomm, MediaTek, and Samsung to shift to the new standard in the coming years. The latter is not wasting time and already promises new Samsung Exynos processors with this new architecture that promises to bring great improvements for future devices.

For comparison, the Exynos 2100 and Exynos 1080 processors use the ARMv8.2-A architecture. That is an incremental upgrade over the ARMv8 version that was launched in 2011, almost 10 years ago. Now, with the advent of ARMv9, we will have chips with vector processing, optimized performance, and security. This will be possible thanks to the ARMv9’s ability to work with machine learning directly on the CPU, instead of relying on specific accelerators. Interestingly, future Mali GPUs will come with advanced features like Ray Tracing. Samsung is a strong user of Mali GPUson its Exynos chips. For that reason,  we might see Ray Tracing coming first on a Galaxy Smartphone with a Samsung Exynos processor. 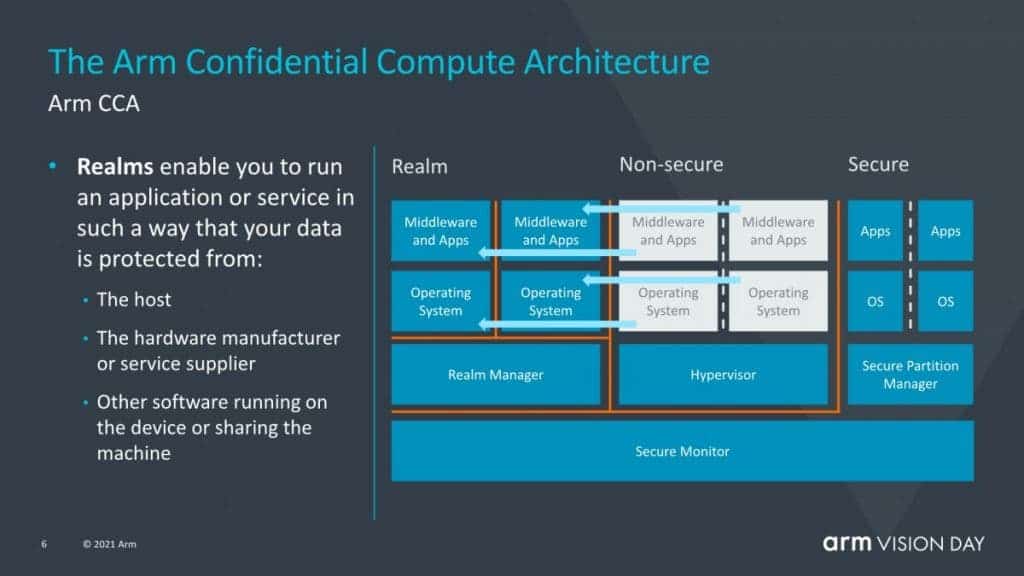 It enhances the security isolating the system through the Confidential Computing Architecture, CCA. They basically function as containers where processes can be executed. However, they don’t now give access to the core of the operating system. So, it’s so secure that not even the Operating System or potential vulnerabilities can affect the new core. According to ARM, even devices with outdated operating systems will be secure when using the ARMv9 architecture.

“ARM’s next-generation ARMv9 architecture offers a substantial improvement in safety and machine learning. The two areas will be further emphasized in future mobile communication devices. As we work together with ARM, we hope to see the new architecture usher in a broader range of innovations for upcoming Samsung Exynos mobile processors.”

According to ARM, the new cores will be able to execute 30% more instructions per cycle than the ARMv8 cores. According to AnandTech’s report, the evolution will bring a 14% increase in performance when compared to the current generation.

Getting back to Samsung, we would not be surprised to see the first ARMv9 cores coming with the next generation of flagship Exynos chips. The new architecture can even make an appearance in the next year’s Galaxy S22 series. Of course, we still have several months to go, and we expect more details to appear in the coming months.