It took a while, but apparently, Samsung is finally bringing 5G connectivity to its mid-range business. The company started with the release of the Galaxy A52 and A72 earlier this month in both 4G and 5G versions. Now, the company is gearing up to launch a new 5G smartphone for the Galaxy M lineup. The device will carry the Galaxy M42 5G moniker and will be based on the very same Qualcomm Snapdragon 750G that is available on the Galaxy A52 5G.

Today, a new Samsung Galaxy smartphone with SM-M426B model number appeared o GeekBench 5 benchmarking database. According to the benchmark listing, the smartphone has interesting specifications like 4GB of RAM, Android 11, and a Qualcomm chipset running at a base frequency of 1.8GHz. The amount of RAM indicates that the handset will be cheap as other Galaxy M smartphones. The Android 11 OS also means that One UI 3.1 will be running on top. 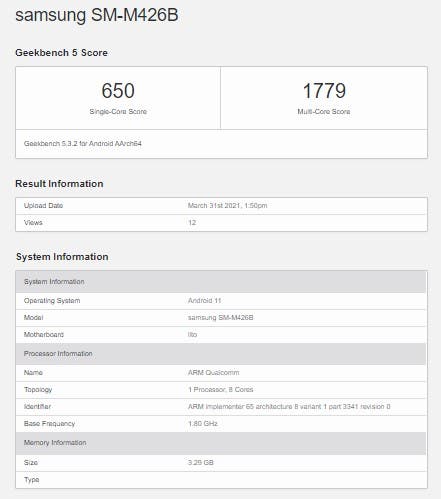 When looked upon the source code, the chipset has the Adreno 619 GPU and this is clearly an indication of the Qualcomm Snapdragon 750G’s presence. This chipset was introduced last year through the Mi 10T Lite and since then has been used in a wide amount of mid-range smartphones with 5G connectivity. The device fills the gap between the mid-tier Snapdragon 690 and the premium mid-range Snapdragon 765G chipset.

As for the handset, an official support page has already gone live in India. The device probably will hit the country very soon, even when its 5G properties will not be used. The device already grabbed certifications on Wi-Fi Alliance, China’s 3C authority, and India’s BIS certification. The naming, however, isn’t confirmed yet.

Samsung already stated that it will be bringing a lot of other mid-range smartphones with 5G connectivity. The Samsung Galaxy M42 clearly isn’t the only one. Apparently, it is said to be working on the Galaxy M62 5G. Moreover, an ODM will take the responsibilities of manufacturing a budget Galaxy A22 5G device which will probably be Samsung’s cheapest 5G smartphone to date. We’re not sure which of these devices will hit the Indian market first.

As far as the Samsung Galaxy M42 5G is concerned, rumors suggest it will pack a 6.6-inch Super AMOLED display. The display will have an FHD+ resolution and a 32MP selfie snapper. The handset will also have a Quad-Camera array with a 64MP sensor leading the way. The AMOLED display will allow the company to go with an in-display scanner. Lights will be kept by a huge 6,000mAh battery with 15W charging. The phone runs with Android 11-based One UI 3.1. We assume there will be multiple RAM/Storage combos starting with 4GB of RAM and 64GB of Internal Storage. The MicroSD card is certainly confirmed.