Due to the sudden coronavirus pandemic, the enthusiasm of enterprises to go to the cloud has been unprecedentedly high. Last year, Huawei Cloud ranked second in the Chinese public cloud market. In addition, Huawei’s Cloud service is also the fastest growing in the world. These statistics were revealed by Huawei’s rotating chairman, Hu Houkun, at the annual report conference today. 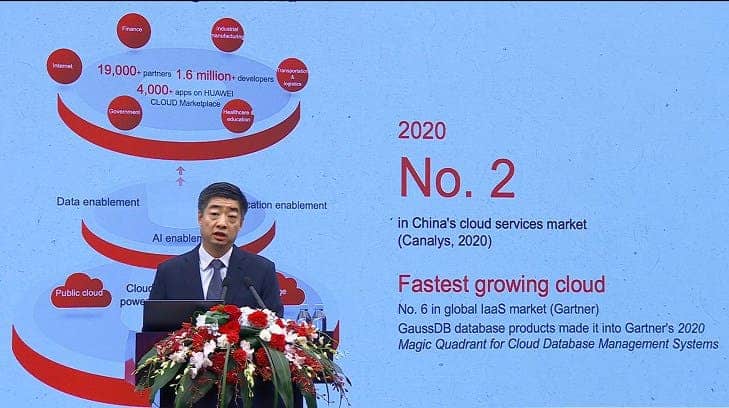 As in previous years, Huawei’s annual report published relevant financial data for the three major businesses including operators, consumers, and enterprises. However, the company did not disclose financial data related to the cloud business. The company includes its Cloud business as part of its corporate business. However, according to Hu Houkun, the growth rate of Huawei Cloud in 2020 is as high as 168%.

“Huawei Cloud has made great efforts in the ecology”. The annual report shows that Huawei Cloud has launched more than 220 cloud services, more than 210 solutions, has obtained more than 80 authoritative security certifications worldwide. The company has also worked with over 19,000 partners bringing together no less than 10,000 developers and more than 4,000 applications to the cloud market.

So far, its smartphones have been largely unavailable because of the ban. However, does not have access to new flagship chips. Thus, it has to make do with the inventory which it received from TSMC before the ban commenced. The issues between the U.S. and Huawei do not seem to be going away anytime soon. The new government in the U.S. is as stringent as the old with respect to Huawei. After the Huawei P50 series, the company will most likely run out of flagship chips. What will happen to Huawei’s smartphone business after that? Well, there is no direct answer to this question. We will just have to wait a few months and see what happens.

Next Redmi Note 11 Pro Wishlist: 7 improvements we'd like to see