Realme has managed to get a lot of popularity in a short period of time. The reason behind its success is not just affordable smartphones but also its other IoT products. Creating an ecosystem of products is very important. The company recently launched Realme Buds Air 2 wireless headphones. Now, they are launching a cheaper version called Realme Buds Air 2 Neo. Realme Pakistan has officially announced the Buds Air 2 Neo and they will be launching on 7th April.

The Chinese company has revealed the design as well as some features that we would see on Realme Buds Air 2 Neo. First of all, the Buds Air 2 Neo is confirmed to come in White color. But there is also a grey or black option expected. The Buds Air 2 Neo resembles Buds Q from last year. However, these ones are more catching thanks to the colorful button on the buds. Furthermore, there is also a rounded case for the Buds that have a button that will be used for pairing. Moving to the features, the Buds Air 2 Neo will feature Active Noise Cancellation. With these affordable buds, the company promises to bring ANC to the masses. 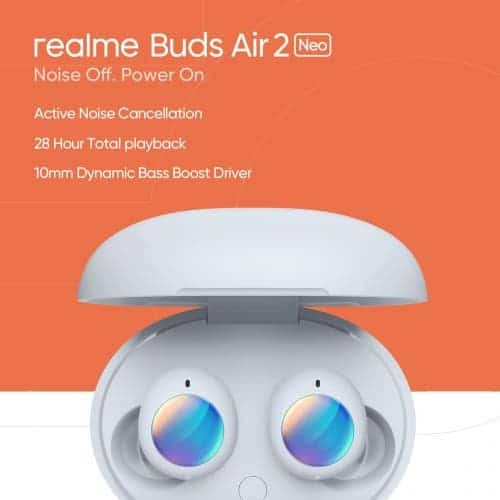 Buds Air 2 Neo will use a 10mm Dynamic Bass Boost Driver. Coming to the battery, there is not an exact figure of the capacity however the company claims it to provide 28 Hour total playback time which is quite impressive. These buds may use two microphones for a better experience when calling someone. I have used Realme Buds Q personally and I found the mic was not really impressive. I hope Realme is able to do a better job on the Buds Air 2 Neo.

Apart from these buds, Realme will also be launching the Realme Buds Air 2, Realme C21, and C25 in Pakistan. The C-series of Realme is a budget-oriented lineup and mostly offers a huge battery capacity with a powerful processor. Realme C21 comes with an Helio G35 chipset, 6.5-inch HD+ display, 13Mp triple rear camera setup, and 5MP front-facing shooter. It has a battery capacity of 5000mAh. On the other hand, the Realme C25 comes with an Helio G70 chipset, 48MP triple rear camera setup, 8MP front shooter, and 6.5-inch HD+ display. It has a huge 6000mAh battery that can be fast-charged at 18W. Let us know your opinions on the Realme Buds Air 2 Neo in the comments section below.