When it comes to flagships, then, first of all, manufacturers talk about cameras, they should be top-end here. To make it more impressive, they form cooperation with well-known camera brands. So, Huawei is working with Leica, Vivo decided to rely on Zeiss optics and OnePlus called Hasselblad for help.

Samsung, on the other hand, prefers to rely on its own strength, but that may change soon. The information came that the company intends to cooperate with Olympus in bringing mobile cameras to a new level. We will see the result of the work of the two companies in the flagships of the Galaxy S22 series. The fact that the information comes from the authoritative network informant Ice Universe (citing @heyitsyogesh), who regularly delivers reliable information about future Samsung products, makes you believe that the camera brand will come to Samsung’s aid.

At the moment, neither Samsung nor Olympus have commented on this information in any way. There is no understanding of whether the parties have agreed on cooperation or are only negotiating, the result of which is still difficult to predict. It is also not clear what contribution and what Olympus specialists will make. 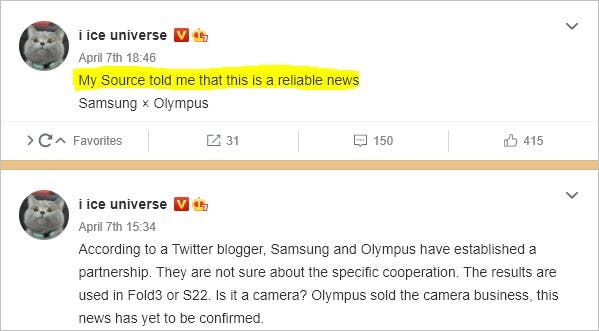 It looks like Samsung has decided to end Sony’s dominance of the smartphone image sensor market. From the analysts’ report; it looks that mobile device manufacturers are increasingly placing orders for the purchase of sensors from the South Korean giant; while the popularity of Sony modules is gradually declining.

The experts concluded that at the end of last year, Samsung’s share in the image sensor segment was 29%. Sony controlled 46% of the market share and closed the top three OmniVision with a 10% share.

Despite the fact that the Japanese company continues to occupy a leading position, its share is beginning to decline. A year earlier, every second sensor sold on the market was a Sony sensor, and Samsung had a 20% share. It is assumed that somehow Samsung still managed to convince manufacturers of the preferability of its products. The fall of Huawei, which was previously actively purchasing from the “Japanese”, also played against Sony.

Also, among the latest interesting developments of the South Korean giant – ISOCELL GN2; with a resolution of 50 megapixels with Dual Pixel Pro automatic phase focusing technology. The company plans to release high-resolution sensors and there are rumors that this year we may see a 200-megapixel module.

Previous Samsung Galaxy M42 is about to get launched