Chinese manufacturing giant, Huawei, has put in a lot of work into its new HarmonyOS. This operating system is already ready for other smart devices like TVs and smartwatches. However, for smartphones, the system still has a long way to go. Huawei focuses on the Internet of Things and it hopes to use HarmonyOS to create an environment where everything connects with each other seamlessly. Now, there are reports that Huawei Mobile Assistant is now visible on HarmonyOS. 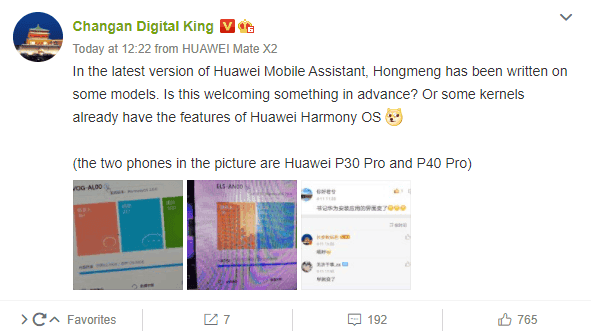 According to popular a Weibo leakster, for some Huawei models, Huawei Mobile Assistant can recognize the HarmonyOS 2.0 system. The models that recognize this system include Huawei P30 Pro and P40 Pro. From this new addition, it appears that the system will be welcoming something in advance pretty soon.

Huawei HarmonyOS will be publicly tested in June this year. A variety of the company’s flagship smartphones will partake in this testing. The first batch of compatible models seems to include Mate X2, P40 series, and Mate 40 series.

According to the previous reports, the first batch of upgrades for Huawei’s HarmonyOS 2.0 mobile phone system will include Mate X2, Mate 40 series, and P40 series. All of these models will get the update later this year.

HarmonyOS focuses on IoT – to connect as many devices as possible

According to Wang Chenglu, President of Huawei’s Consumer Business Software Department and Head of AI, HarmonyOS will be active in no less than 300 million devices this year. For him, this system offers a single language that the IoT era needs. The company wants all smart devices to be able to collaborate efficiently.

“For example, you can use a smartwatch to determine certain critical scenarios. After the user falls asleep, the watch will detect sleep and cause the lighting to automatically turn off. Also, it will inform the air conditioner to automatically adjust the temperature to create the best sleeping environment. This is just like having a caring housekeeper at home. Also, during exercises, each exercise has connections to the other. The smart devices provide scientific exercise advice and comprehensive data analysis in real-time, becoming your personal trainer”.

As of now, it is difficult to achieve because different devices come with different operating systems. Thus, connecting these different systems together will be a huge task. The interconnection of smart devices requires ONE language that allows devices to communicate with each other.

Next TikTok is vigorously popularizing the Chinese culture