Since the advent of TikTok, its growth has been a sensation. The short video application is very popular among teenagers. However, it is slowly creeping into the corporate world. In a recent report, a lot of Chinese content is reaching the rest of the world via this app. 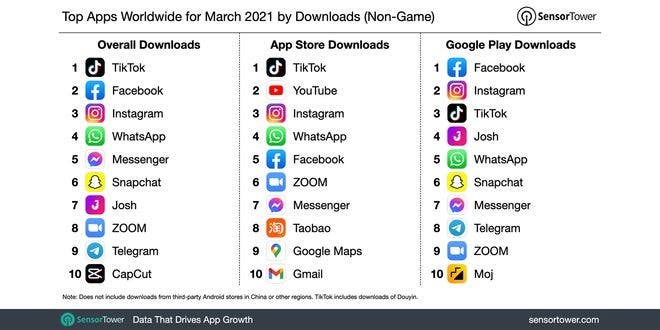 A recent report from the research firm, Sensor Tower, shows that TikTok continues to top the list of global mobile app downloads in the first quarter of 2021. The Chinese short video app racks up over 58 million downloads in March this year.

Currently, this app has more than 100 million monthly active users in the United States alone. With the global popularity of this app, the Chinese cultural elements carried by short videos have also crossed the language barrier and have gained increasing attention.

Searching for “China (中国)” on TikTok, the total number of views related to the topic exceeds 13 billion. These videos include Chinese traditional crafts, folk culture, food culture, customs, national treasure panda, and other short video content. Li Ziqi, the hottest Internet celebrity on YouTube, began publishing works on TikTok in October 2019. Currently, she has more than 2 million fans on TikTok and has received more than 15 million likes.

In addition, “#hanfu (汉服)” is also a microcosm of Chinese cultural pop on TikTok, with a total of more than 300 million views on related topics. These videos cover various topics such as taking photos on Hanfu Street, martial arts style, and finger dance.

Furthermore, the “Miss Tumbler” in Datang Buxuecheng, which is on fire in Xi’an Datang Furong Garden, is on TikTok. This video has been viewed more than 3.2 million times and won 400,000 praises. There are more than 1,500 messages in the comment area, including English, Korean, Vietnamese, Arabic, and other languages.

For more information on  TikTok as well as other apps, click here

As of last year, HBO received 300 applications for summer internships through the #HBOMaxsummerintern tag campaign. In addition, the Clothing brand, Hollister, is recruiting social media positions through cooperation with TikTok. Furthermore, Contra, an emerging freelance work platform, claims that 80%-90% of Gen Z users of the platform come from its social platform accounts such as TikTok.