Vivo launched its Vivo V20 series several months ago and is ready to unleash the Vivo V21 series later this month. According to recent reports, the company will unveil the Vivo V21 and V21e smartphones on April 27 in Malaysia. We also learned that the company will unveil the Vivo V21 series in India on the very same date. The entire Vivo V21 series is expected to include the vanilla V21, V21e, V21 Pro, and Vivo V21 SE smartphones. As far as the SE variant is concerned, it was spotted in the Indian IMEI database a couple of weeks ago with model number V2061. Now, the device with the very same model number appears on the Google Play Console. As expected, Google’s certification confirms the design and some of the key specs of the upcoming smartphone.

According to the Google Play Console listing, the Vivo V21 SE (V2061) will pack the Qualcomm Snapdragon 720G which is a little underwhelming at this point since it’s also present on other V20 smartphones. The Snapdragon 720G was widely used last year, now there are better options in the market than the Snapdragon 732G. However, due to the chipsets shortage, we assume that companies are sticking with the chipsets they have in stock. The chip will be paired with 8GB of RAM and the graphical tasks are ensured by an Adreno 618 GPU. 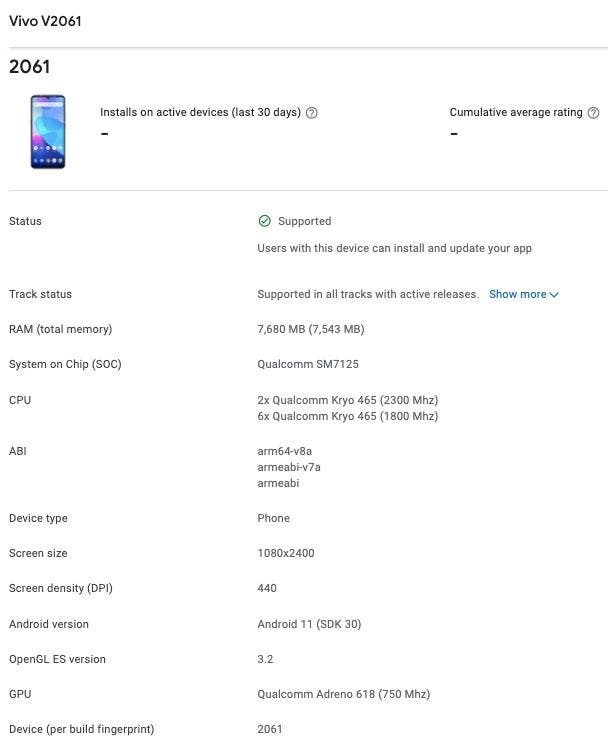 The handset has a waterdrop notch display with a 2,400 x 1080 pixels resolution and 440 ppi pixel density. According to previous reports, the Vivo V21 SE is a rebranded iQOO U3 for the Indian market. The reason for this speculation is that the iQOO U3 carries a model number V2061A, which is very similar to the upcoming Vivo smartphone.

The remaining specifications such as display size, storage amount, and camera specs are still a mystery. However, if Vivo plans to launch this as a rebranded iQOO U3 we know the rest of the specifications. It has a 6.58-inch IPS LCD and will come with 6GB of RAM with 128GB of Internal Storage. We also expect another variant with 8GB of RAM and 128GB of Internal Storage.

The handset features a dual-camera setup with a primary 48MP shooter. On the waterdrop notch, it comprises an 8MP selfie snapper. We expect a 5,000mAh battery fueling the smartphone with 18W fast-charging. Of course, take in mind that these are just assumptions based on the specs of the iQOO U3. In the end, the device can still be different from the iQOO U3.

We expect more details to appear regarding the Vivo V20 SE and the entire lineup as the launch date comes near.
Source/VIA :
MySmartPrice