Samsung is gearing up to expand the 5G availability on its smartphones. After having this network consolidated among its premium devices, the brand is finally bringing it to the mid-range segment. Rather than going fully 5G, the brand is still betting on 4G and 5G variants for some smartphones. Recently the brand unveiled its Galaxy A52 and A72, and now is moving to release its cheapest 5G phone in the form of the Galaxy A22 5G. Meanwhile, a not-so-trending lineup, the Galaxy F series, is about to get a new contender with Galaxy F52 5G moniker.

Back in the last month, pieces of evidence of Galaxy F52 5G’s existence were discovered on a 3C certification listing. Now, the device has acquired Bluetooth SIG certification and Wi-Fi Alliance approval. These two certifications are two important steps before a release. So based on this, we can assume that the Galaxy F22 5G is inching close to a release. Neither Bluetooth nor Wi-Fi certifications are known for being very revealing. However, we can spot some neat details about the handset. One isn’t a big surprise – The device will run Android 11 straight out of the box. Nowadays, Samsung is pushing all its smartphones with One UI 3.0 and Android 11. 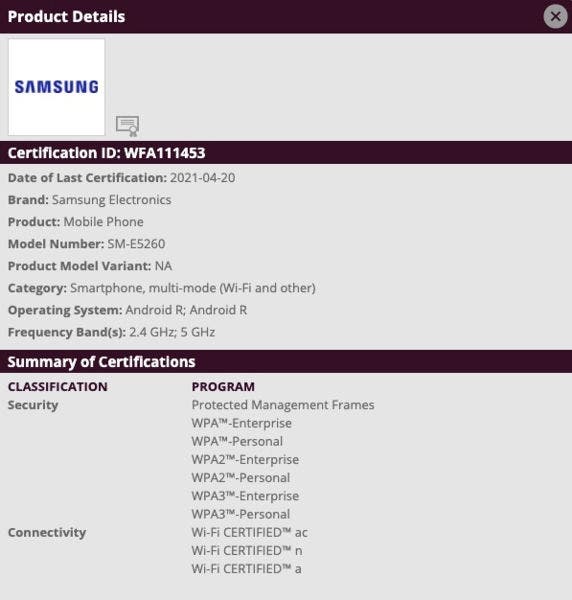 The Wi-Fi Alliance certification also confirms the device’s model number as SM-E5260. This is the same model number that appears on the Bluetooth SIG certification. If we have a closer look at the details revealed by the Wi-Fi certification, we can see that the Galaxy F52 5G will come with dual-band Wi-Fi (2.4GHz and 5GHz). Unfortunately, other details such as display size, camera specs, and hardware remain unknown. The 3C certification, however, confirms 25W fast-charging. This has been a standard for some of Samsung’s newest mid-range devices.

For a quick comparison, one of the latest devices coming under the Galaxy F series was the F62. The device packs a 6.7-inch Full HD+ Super AMOLED display and was powered by the Exynos 9825 chipset. It boasts 8GB of RAM and 128GB of Internal Expandable Storage. The device comes with a Quad-Camera setup comprising a 64MP shooter. The device also has a 32MP punch-hole camera. Last but not least, the device draws power from a huge 7,000mAh battery with the very same 25W fast-charging. We expect the new Galaxy F52 to be close to the F62 with the most obvious change being the new 5G chipset.

Previous Samsung SmartThings will let you know if someone is tracking you!