It is reliably known that the premiere of the gaming Redmi K40 Game Enhanced Edition will take place on April 27. In its usual manner, the company is stirring up interest in the new product and promises that it will be one of the best smartphones for gamers in terms of price/performance ratio. The Dimensity 1200 chip will be responsible for the gaming power of the Redmi K40 Game Enhanced Edition; and in order for you to have no doubt that this is a truly productive solution; the company has published the result of the smartphone’s race in AnTuTu.

According to the results of the smartphone test in AnTuTu V9, it scored 724,495 points. The result looks quite impressive and this is the level of the Snapdragon 870. You won’t have to complain about the performance. Apparently, the system will work quickly, any games will run on the Redmi K40 gaming smartphone at maximum settings and the power reserve will last for a couple of years for sure.

True, we keep in mind that high performance is not equated with stability; and, as you know, in terms of heating with MediaTek chips, everything was not always smooth. Therefore, the Dimensity 1200 also needs good cooling. Let’s see if the company will be able to offer a solution that allows you to consistently maintain a high level of productivity. 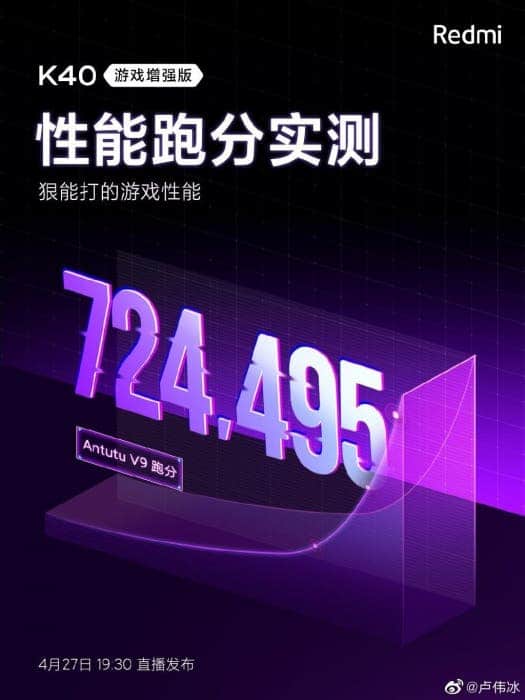 Redmi, a sub-brand of Xiaomi, announced recently that the K40 Game Enhanced Edition gaming smartphone will launch in China on April 27. However, the Master Lu benchmark data suggests that the more affordable Redmi K40 Game Standard Edition will also see the light.

Some reports point that the Redmi K40 Game Standard Edition will run the MediaTek Dimensity 1100 chipset; alongside an 8GB of RAM. The storage capacity will be 256 GB. The smartphone will receive a display with Full HD + resolution. In the Master Lu benchmark, the device scores 758,248 points. Recall that the more advanced Redmi K40 Game Enhanced Edition is credited with the Dimensity 1200 chipset. The smartphone, according to available data, will receive a 6.67-inch Samsung E4 AMOLED screen; with a 144 Hz refresh rate and a 5000 mAh battery.

Next Poco M2 Reloaded smartphone launched with a small difference