Over the past few days, there have been a couple of official teasers of the upcoming Redmi K40 gaming version. Earlier today, we saw the first real images of this smartphone revealing its pop-up shoulder button. Now, the company has officially released some teasers of this smartphone showing the feature. The Redmi K40 gaming version pop-up shoulder button supports instant switching of game modes. This feature also allows the smartphone to support a perfect 4-finger control. 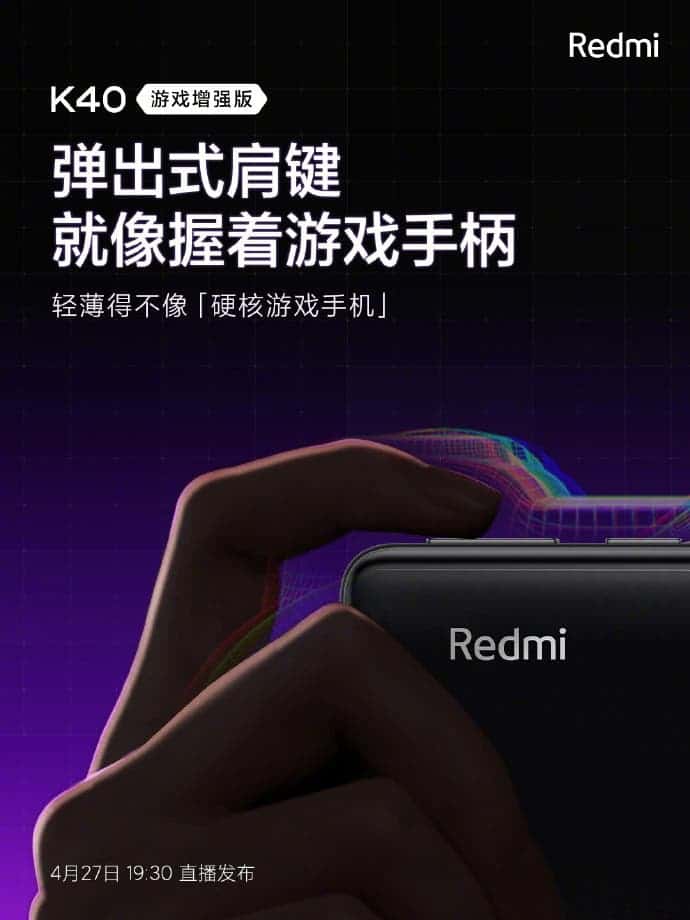 According to Redmi, this smartphone is the first to use miniature mechanical shoulder keys. This means that they have a much smaller size but the hand feeling remains the same. The company also promises that these keys offer high key travel, good rebound, clear feedback, and low extension. Furthermore, the Redmi K40 gaming version mechanical keys can withstand over 1.5 million presses. According to the company, this was revealed in a harsh durability test.

In addition, the company revealed that the pop-up shoulder button gets its inspiration from the maglev train. The sleek and portable appearance of this button is worth talking about. Also, the keys are customized with high-quality neodymium iron boron magnets, which can never be demagnetized.

As a gaming smartphone, there must be provision for heat dissipation. The Redmi K40 gaming version comes with the necessary VC liquid cooling for e-sports. It also uses 11540mm² large-area graphene which takes care of all heating issues. The heat also dissipates via the antenna area.

Under the hood, this device will have a MediaTek Dimensity 1200 chip. The body is very thin and it uses a side fingerprint sensor. There is also a circle of LED lights around the lens module which gives it a gaming appearance. According to reports, this device will officially hit the road on April 27th.

On the display end, this smartphone will come with a Samsung E4 OLED. This single punch-hole display has a high 144Hz refresh rate. To keep its lights on will be a huge built-in 5000 mAh super-capacity battery that supports 67W ultra-fast flash charging.