Following the start of sales of Apple smart key fobs, reviews of the accessory appeared on the network. In particular, a major drawback of the device became known. Despite the seeming practicality, the compact gadget turned out to be extremely easy to scratch – even with careful handling.

According to numerous photo reports from bloggers, the shiny stainless steel surface of the AirTag takes on an unsightly look literally in the very first days of use. The same goes for the plastic surface on the back of the compact device.

“Personally, it doesn’t really bother me with this type of device – I’m not going to waste time looking at it, and for the most part my goal will be to get it out of sight. But those who are not indifferent to scratches on AirTag should know about it, “- noted in his review the popular tech Youtuber Marques Brownlee, owner of the YouTube channel MKBHD.

For future buyers of the device, the cost of which is $29, the authors of the reviews recommended using protective covers. In addition, most of these accessories have a key ring loop; making it easy to attach the beacon to a bag or other item. 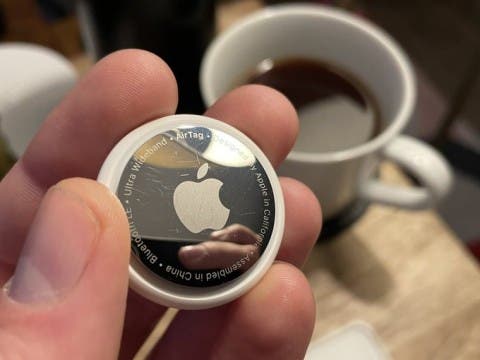 After numerous rumors and leaks, Apple finally unveiled the AirTag tracker for finding things. To find it, the U1 ultra-wideband chip will be used; which can be found in iPhones starting from the 11th series and the HomePod mini smart speaker. However, an interesting detail that was not mentioned during the presentation is that even Android users can identify the AirTag in Lost Mode.

Since AirTag is deeply integrated into the Apple ecosystem; it requires an Apple device with a U1 chip to work properly with it. The process of setting up and tracking an accessory is done using the Find My app; making the tracker useless for Android users. However, Apple has made sure to provide users with the maximum opportunity to retrieve lost items.

According to a new support article published recently on Apple’s website; AirTags in loss mode will be readable by any other device with an NFC chip. Thus, even if the owner of an Android smartphone with an NFC chip finds the tracker; he will be able to read it by learning the owner’s contact information on a special web page that will open after the tag is read.

Next Black Shark 4 has confidently passed the durability test