AMD released its first-quarter earnings this week, showing impressive revenue growth: it grew 93% to $ 3.45 billion year-over-year, and 6% in a sequential comparison. On the client-side, revenue grew by 46%, on the server side and in the segment of custom products – by 286% at once. The outlook for the year has been improved to a 50% increase in revenue.

The company’s operating income in the first quarter reached $ 662 million, an increase of almost four times, and net income grew three and a half times to $ 555 million. Earnings per share more than tripled to $ 0.45. The profit margin remained at the level of the same period last year – 46%, but at the same time increased by one percentage point compared to the previous quarter. AMD management attributes this to an increase in operating costs by 45%, including due to a shortage of components, as well as a crisis in the logistics industry. 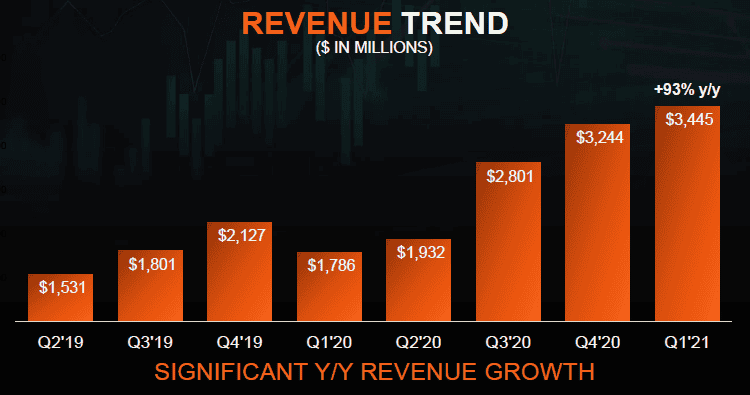 If we consider the activities of AMD in individual segments, then in the direction of computing and graphics solutions, revenue for the year increased by 46% to $ 2.1 billion, in a sequential comparison, the increase was 7%. The management explains this dynamic by the high demand for consumer Ryzen processors and Radeon graphics cards. Average selling price has been rising in both the CPU and graphics segment. In fact, the revenue from the sale of client processors and their average price have reached record levels. 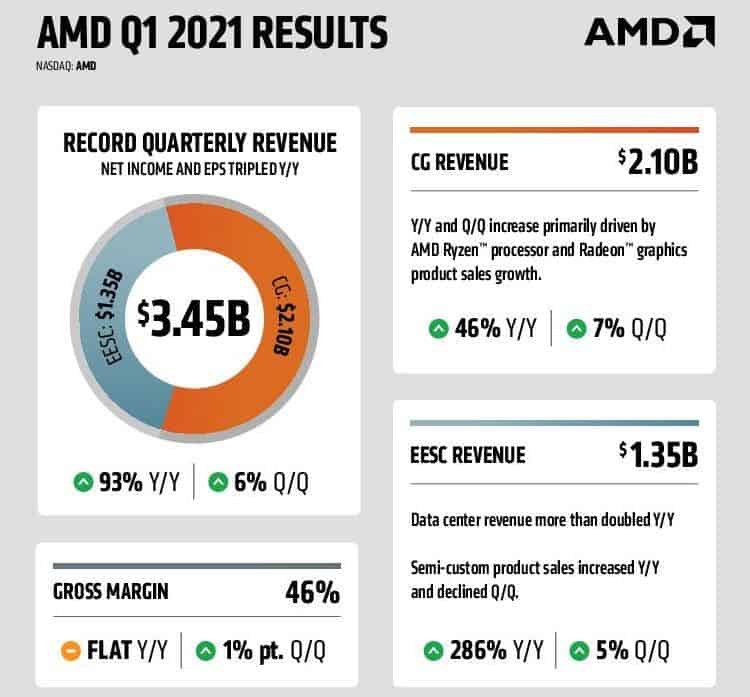 AMD has no doubts that in the first quarter it strengthened its position in the segment of client processors in monetary terms. This share has doubled over the past two years, driven by increased demand for more expensive AMD client processor models. Revenue in the mobile segment has been breaking records for the sixth consecutive quarter. The growth rate of revenue from the sale of mobile versions of Ryzen 5000 was twice as high as that of its predecessors.

In the graphics segment, AMD’s revenue increased by “significant double digits” both year-on-year and sequentially. Directly, revenue from the sale of senior models of graphics processors of the Radeon RX 6000 series has more than doubled sequentially. Until the end of the quarter, the announcement of mobile graphics solutions Radeon RX 6000 is promised. In the coming quarters, the growth in sales of video cards of this family will continue, as noted by representatives of AMD. So far, the company’s management is not sure that the deficit will be overcome in the second half of the year, but purposeful work is carried out every day.

AMD’s Enterprise, Embedded and Semi-Custom segment posted 286% revenue growth to $ 1.35 billion in the first quarter, thanks to both gaming console components and EPYC server processors. In a sequential comparison, by the way, revenue in this segment increased by only 5%, partly to blame for the decrease in demand for components for game consoles, typical for the second quarter after the announcement, but still less pronounced than usual.

AMD has managed to almost double its revenue

Directly, revenue from the supply of server components has once again renewed the record, sales of EPYC processors have more than doubled in annual comparison, and they have sequentially increased by a significant double-digit number. Overall, sales of data center products in the first quarter accounted for nearly 20% of the company’s revenue. The previous generation Rome processors still form the bulk of the core revenue, but in the third quarter the initiative will be taken over by the newest Milan processors, presented in March.

In the second quarter, AMD expects to generate from $ 3.5 to $ 3.7 billion, which is 86% higher than the result of the same period last year, and 4% more than last quarter’s revenue. The full-year revenue forecast has been improved from 37% to 50% in January from 37% to 50% in terms of growth, which is a pretty cocky statement against the backdrop of continued component shortages. However, as AMD representatives explained, if they were not sure of the ability to proportionally increase the volume of product shipments, they would not revise the forecast for annual revenue upward.