Following the results in the global smartphone market, the results of the first quarter of 2021 came in time for the European region. It was compiled by Counterpoint analysts and the first thing that catches the eye is that the market is recovering from the crisis of last year and began to grow steadily. The three leaders in Europe look similar to the one that rules the world market.

Samsung has become the number one company in Europe, controlling almost a third of the market – 32%. And this is 2% more than a year earlier, and in annual terms, the increase was 13%. In second place was Apple, which managed to grab 28% of the market share. The Cupertino-based company has clearly raised its market share thanks to the iPhone 12 line, for which there is still demand.

Realme is rising, while Huawei and Honor are doing badly in Europe 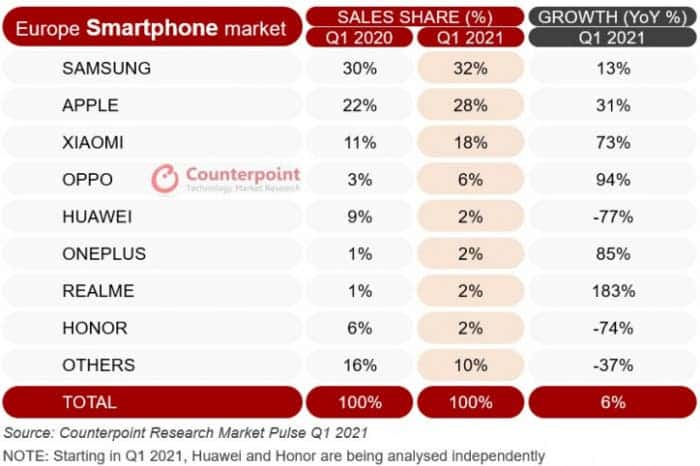 The third came to the finish line Xiaomi, whose market share in Europe is estimated at 18% against 11% a year earlier. The company managed to jump 73% year on year. But it did not add the most, Realme became the leader with a result of 183% growth. It came in seventh place with a 2% share and left behind Honor, which took the eighth position of the largest companies in Europe and, along with the former parent company, is rapidly losing its positions.

Oppo came in fourth with a score of 6%, which is twice the share it occupied in the first quarter of last year. Huawei managed to cling to the top 5, and its share was 2%, whereas a year ago this figure was 9% and the drop was 77%. Over the past year, OnePlus has also added, which managed to climb to the sixth line of the table of ranks with a score of 2%.

Counterpoint Research’s Associate Director, Jan Stryjak said, “Q1 2021 was a prime example of the intensely competitive nature of the European smartphone market. January saw Apple as the clear leader following its most successful device launch ever; Samsung rebounded in February on the back of strong sales of its latest flagship Galaxy S21 series and popular Galaxy A series; and then Xiaomi reached its highest market share in Europe ever in March thanks to the launch of its own flagship Mi11 devices. OPPO, OnePlus, realme and vivo also continue to grow strongly, with most having launched new devices in the quarter.”