Xiaomi demonstrates record results in smartphone sales, the company is on the rise and is increasing sales from quarter to quarter. This is not surprising, because with the fall of Huawei, a niche has opened up that Xiaomi is rapidly filling. Analysts at Canalys summed up the results of the first quarter of this year and came to the conclusion that the first three months of this year were the best quarter for Xiaomi in its history in terms of smartphone shipments.

In the first three months of 2021, the Chinese company managed to ship 49 million smartphones and take 14% of the market share. The year-on-year growth was an impressive 62%. And the most interesting thing is that Xiaomi is lagging behind Apple by only 1%. The Cupertino giant shipped 52.4 million iPhones against 37.1 million a year earlier. Apple’s market share was 15%.

And the first line of the table of ranks of the largest smartphone manufacturers is still held by Samsung; which controls 22% of the market share. In quantitative terms, this is 76.5 million smartphones shipped. The South Korean giant is showing stability and a year earlier its share was the same; but then the volume of units sold amounted to 59.6 million.

Oppo and Vivo continue to grow, which managed to grab 11% and 10% of the market share, respectively. In total, in the first quarter of this year, smartphone shipments amounted to 347.4 million units against 272.5 million a year earlier. On an annualized basis, the market is up 27% and is showing strong signs of recovery from last year’s decline due to the pandemic. 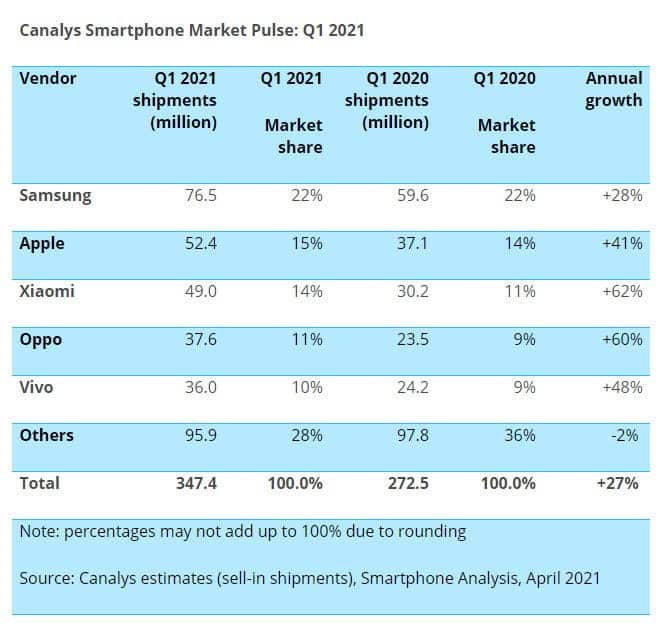 On Monday, Xiaomi CEO Lei Jun announced on his Weibo account the company’s first major achievement with the new Xiaomi Mi Band 6 fitness bracelet. In less than a month, the company sold more than 1 million copies of the device.

To the published post, he attached an image showing the sales volume of Xiaomi Mi Band 6; which only hit the shelves on April 2, that is, a little over three weeks ago.

Recall that the fitness bracelet was presented in March, one of the differences from the previous generation is an AMOLED screen enlarged to 1.56 inches with rounded edges and the thinnest possible bezels around. The company has implemented support for tracking oxygen levels as well as automatically enabling workout tracking.

The cost of the basic version of the bracelet without NFC is about $ 35, and with NFC about $ 43. Such a high sales figure demonstrates the demand for the gadget in various markets. It is worth saying that all generations of Mi Band have become bestsellers; so the success of the new product is perhaps not surprising.

Previous iPhone 12 Is The Most Popular Model, But iPhone 12 Pro Sells Well Too

Next Realme is rising, while Huawei and Honor are doing badly in Europe