Realme has announced that it has sold over 50,000 units of its new Realme Q3 series smartphones. The lineup has the Realme Q3 5G and Realme Q3 Pro 5G and both of them went on sale yesterday. Interestingly, the Realme Q3i 5G was made available as well, a couple of hours after the Q3 series launch. All these devices bring decent specifications and one of its more appealing details is the 5G availability as well as the cost-effective appeal.

The Realme Q3 series is very accessible with smartphones that start at CNY 1,000.  That price is for the Realme Q3i which is the most affordable smartphone in the lineup and the company had to cut some corners to achieve that. The Realme Q3 5G and Q3 Pro 5Goffer better chipsets, displays with higher refresh rate, fast charging technology and cost more – CNY 1,300 and CNY 1,600, respectively. The handsets are available through the company’s website. Local retailers will also get it at a later date. As the devices have crossed this impressive number in just one day, we wonder what will be Realme’s next step with its recently released devices. 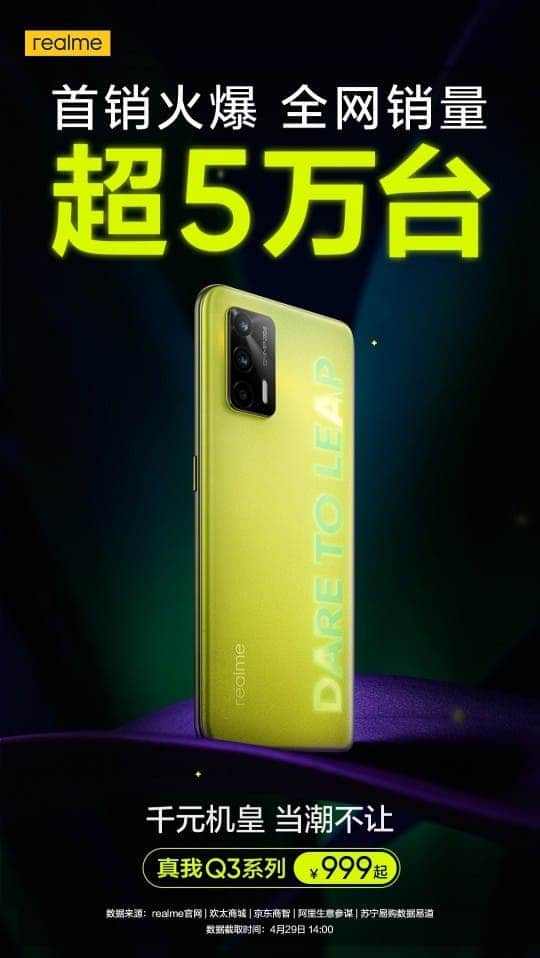 Worth noting, that 50,000 units are just a small chunk of smartphones. If you recall, the previous generation sold already 1 million in the first 6 months. Of course,  these numbers are available for sales in China only. The devices will eventually hit other countries. For example, the Realme 8 5G is a rebranded Realme Q3i. In the last year, Realme unveiled the Realme Q2 on global markets as Realme 7 5G in the West. In India, the device is the Realme Narzo 30 Pro 5G. While the Realme Q3i is already available across global markets as Realme 8 5G, we believe that the Realme Q3 Pro is a stronger contender for becoming a Realme 8 Pro 5G.

Realme is reportedly preparing a smartphone with Snapdragon 750G and as per the rumors, it will arrive as Realme 8 Pro 5G.

The Realme Q3i comes with a MediaTek Dimensity 700 SoC, up to 6GB of RAM, and up to 128GB storage. It features a triple-rear camera setup with a primary 48MP camera. The device flaunts a 6.5-inch IPS LCD with a 90Hz refresh rate and HD+ resolution. There is a 5,000mAh battery keeping lights on with 18W fast charging.

The Realme Q3 has the same 6.5-inch diagonal but increases the refresh rate to 120Hz and the resolution to FHD+. Under the hood, it has a more powerful Snapdragon 750G, packs a 48MP triple camera setup, a 5,000mAh battery with 30W fast-charging. The Q3 Pro 5G brings a smaller 6.43-inch display, but it’s AMOLED and offers FHD+ resolution with a 120Hz refresh rate. Under the hood, it has a much better MediaTek Dimensity 1100 chipset. In terms of optics, the Pro variant sports a 64MP primary camera. The device runs with a 4,500mAh battery fed by 30W fast-charging.

All three smartphones come with Android 11-based Realme UI 2.0 straight out of the box.