The demand for computers based on Chrome OS is growing rapidly as e-learning platforms evolve amid the ongoing pandemic.

HP became the largest supplier of Chromebooks in the last quarter, capturing a third of the corresponding market – 33.5%. Another 25.6% of the global industry belongs to Lenovo, which is in second place. “Bronze” went to Acer with 14.5%. Thus, these three companies collectively control nearly three-quarters of the global laptop market for Chrome OS.

In fourth place is Dell with a share of 11.3%. The South Korean giant Samsung closes the top five with 8.0%. All other suppliers jointly hold only 7.2% of the world market.

“While vaccine rollouts and businesses returning to offices may slow down the work-from-home trend, we are still far from returning to ‘normal’ working conditions and hence the demand for tablets, especially detachables, is expected to continue for a while,” said Anuroopa Nataraj, research analyst with IDC’s Mobility and Consumer Device Trackers. “However, as buyers increasingly turn towards competing products, such as thin and light notebooks for work or entertainment and Chromebooks for education, the future of tablets will remain under constant competition, leaving the heavy lifting to larger brands such as Apple, Samsung, Amazon, and Microsoft.” 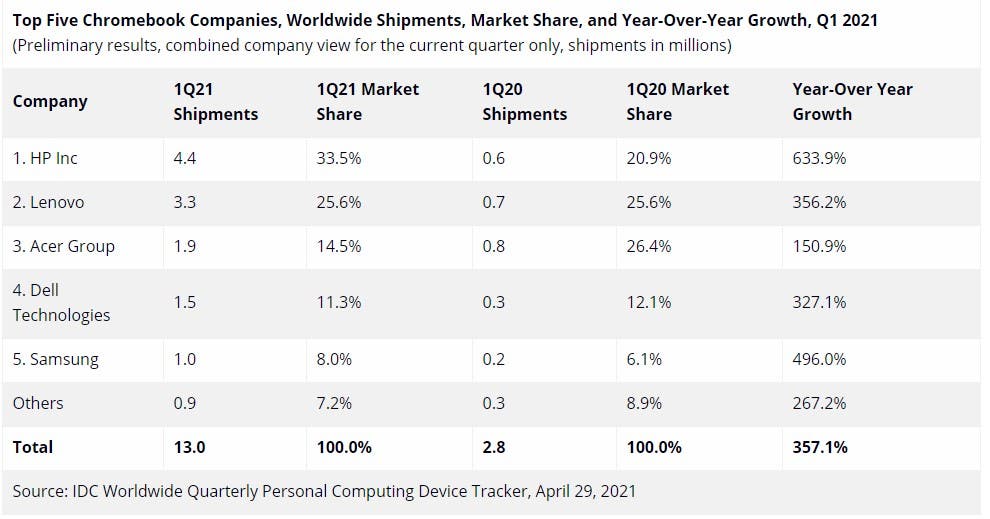 “There’s no doubt that Chromebooks have supplanted tablets in many education markets. However, price and the dependence on cloud services have prevented them from becoming mainstays in all regions”; said Jitesh Ubrani, research manager with IDC’s Mobility and Consumer Device Trackers. “Besides, Chromebooks have yet to break into the consumer market in a meaningful way as competing notebooks as well as tablets, such as the iPad, Galaxy devices, and Fire tablets, maintain a strong presence.”