According to Apple, since the inception of the App Store, there have been threats from fraudsters. Over time, the number of fraudsters is increasing and becoming more sophisticated. In response to these threats, Apple has increased the scale of its operations. The company is also taking maximum precautions to combat the risks faced by users and developers. According to the company, it spent a lot of resources behind the scenes to ensure that these dangerous elements do not get a hold on users’ sensitive information. 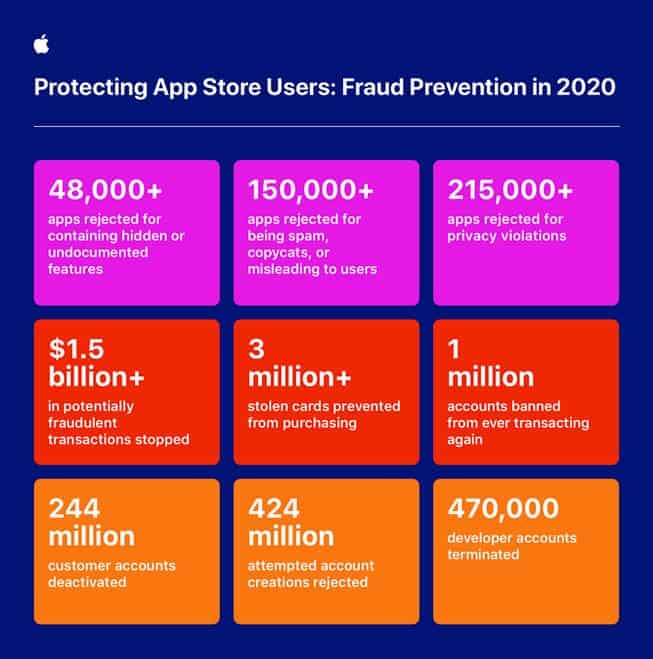 In order to ensure that the newly launched apps can provide users with the best experience, the Apple App review team will review each app and its updates. The audit standards are mainly based on Apple’s guidelines, including privacy, security, and duplicate release issues. However, the guiding principle is not static, it will be adjusted over time in order to deal with new fraudulent methods.

In 2020 alone, nearly 1 million new apps that did not meet the guidelines were rejected by the App Store. Furthermore, another 1 million updated apps with similar problems were removed from the shelves.

Among the nearly 1 million apps that did not meet the standards, some apps may seriously harm the interests of users. For example, the App review team found that 48,000 apps contained hidden or undocumented functions; 150,000 apps were found to have repeated releases, plagiarism, or payment for manipulating users, and so on.

Some developers use package drop methods to completely change the way the app works after it passes the review, thereby circumventing the guiding principles and committing violations or even criminal acts. Once Apple discovers such apps, it will remove them from the App Store immediately. The developers will be notified that they need to go through a 14-day appeal process, otherwise their accounts will be permanently closed.

Last year, Apple had to remove about 95,000 apps from the App Store due to this type of package adjustment. These include real-money gambling apps, predatory lending and pornography platforms; using in-game signals to facilitate drug transactions; and rewarding users to guide users through video chat to broadcast illegal and pornographic content.

Another common reason for apps being rejected is that they ask users to provide more data than they need, or they mishandle the collected data. In 2020, the App review team rejected more than 215,000 apps from listing due to these privacy violations.

Dealing with fraudulent ratings and reviews

According to reports, Apple App Store ratings and reviews can help many users decide which apps to download. It also helps developers launch new features in response to user feedback. Apple uses an advanced system that combines machine learning, artificial intelligence, and expert manual review to monitor these ratings and reviews to ensure their accuracy and user trust. Since 2020, Apple has processed more than 1 billion ratings and 100 million comments. Out of these ratings, Apple had to expunge more than 250 million ratings and comments due to non-compliance with supervision regulations. Apple recently put into use a new tool to verify the authenticity of ratings and comment accounts, analyze these text comments to check for signs of fraud, and ensure that all content of disabled accounts is removed. Dealing with account fraud

Financial and transaction information is the most sensitive category of data that users share online. Apple has invested a lot of resources in building more secure payment technologies, such as Apple Pay and StoreKit. More than 900,000 apps in the App Store are using these technologies to sell goods and services. For example, credit card information in Apple Pay will never get to the merchants. This eliminates the risk factors in the payment transaction process.

Next Xiaomi Reached Settlement With US Government, Removed From Blacklist