In January of this year, the US government announced that it would include 9 Chinese companies on the “Communist Chinese military companies” list. Plus, it restricted US investors from trading the securities of these companies. Surprisingly, Xiaomi appeared on the list as well.

This action also caused a sharp drop in Xiaomi’s stock price, with cumulative losses exceeding 30% at one time. Xiaomi also refuted this immediately and sued the U.S. Department of Defense and U.S. Treasury in the District Court of the District of Columbia on January 31.

Why Has US Considered Xiaomi As A Military Company?

At that time, The Wall Street Journal wrote that Xiaomi was blacklisted because the founder of the company, Lei Jun, was honored with the “Outstanding Builder of Socialism with Chinese Characteristics”. However, there should be other more serious reasons behind such a decision. There is the China–United States trade war. So there is every reason to think Xiaomi’s recent success caused such a behavior. It has managed to climb the third position in the global smartphone market. And the American Apple is feeling that Xiaomi is already breathing down the neck.

Yesterday, Xiaomi Group and the US Department of Defense once again issued a Joint Status Report (JSR) on the military inventory lawsuit, and the two parties reached a settlement. 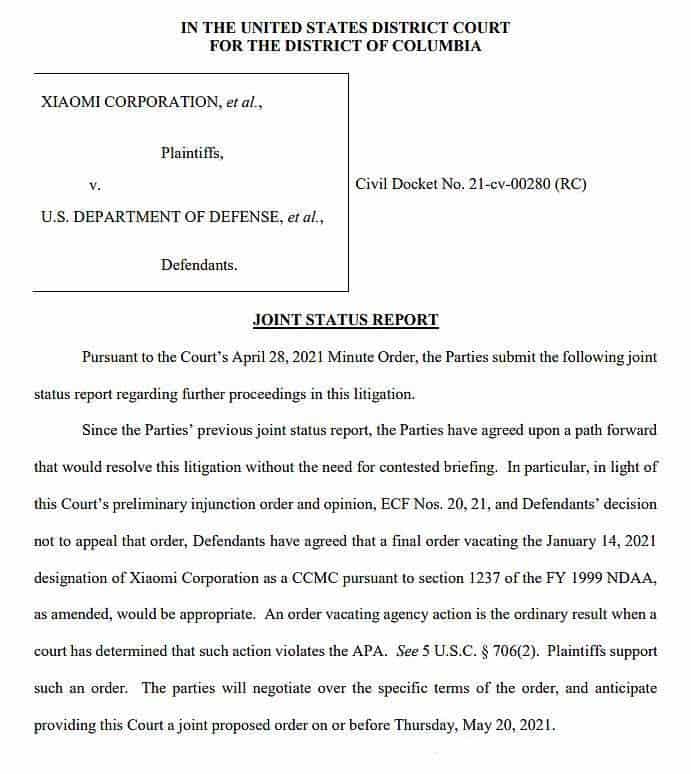 The document shows that the US government and Xiaomi Group have agreed to settle the lawsuit peacefully. The Defense Department and other defendants also agree that it is appropriate to adopt a final resolution to remove Xiaomi Group from the military list. The two parties will negotiate and draft specific content on the final resolution. They should submit it to the court on or before May 20.

This means that Xiaomi won the lawsuit against the US government. So the United States will no longer restrict any activity with Xiaomi no longer.

Xiaomi Chose Another Way For Defending Its Rights

In fact, as early as March, the US court considered that Xiaomi’s consideration as a military enterprise was inappropriate. On March 12, it issued a temporary injunction and suspended the identification of Xiaomi as a Chinese military enterprise. This executive order lifts restrictions on the purchase and holding of Xiaomi stock by American investors.

Previously, some insiders believed that Xiaomi did not wait to die in the face of unreasonable suppression by the US government. Instead, Xiaomi was very brave to communicate with the US government through legitimate means of legal proceedings, protecting employees, consumers, and partners. The interests of the parties are worthy of praise.