In January of this year, Motorola showed a demonstration video of its air charging technology. Recently, Motorola once again promoted a more powerful wireless charging solution.

Motorola has recently cooperated with GuRu Wireless, a manufacturer of in-air wireless charging technology solutions, to create a wirelessly charging smartphone with a brand-new solution.

GuRu’s air wireless charging solution is constructed by using a small transmitter composed of interconnected (mmWave) modules. Millimeter wave is a kind of radio frequency that usually works in the range of 30GHz to 300GHz. It is similar to the frequency of the current ultra-high-speed, short-range 5G network to transmit wireless signals. 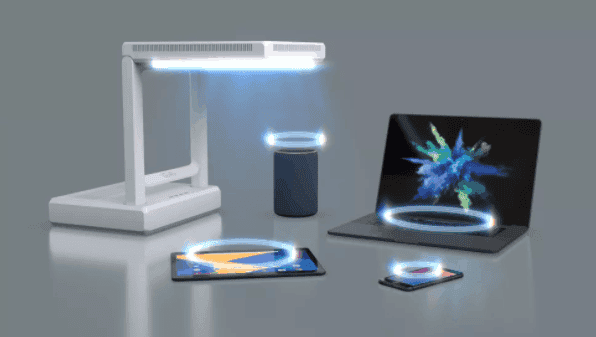 Therefore, the wireless charging technology can transmit power in a more controlled and safe manner. Thanks to GuRu’s use of millimeter wave frequencies and intelligent algorithms, its transmitter and receiver can be miniaturized, and it can better guide and limit electromagnetic waves.

According to GuRu, their generators can be connected at a distance of more than 30 feet (approximately 9 meters) at the same time and transmit power to multiple receivers regardless of the power of the connected equipment.

In addition, GuRu’s devices are also extremely scalable. This wireless technology can power various devices ranging from headphones and smartwatches to laptops and tablets. It can also charge multiple devices simultaneously.

Like the one described above, Motorola uses a small millimeter-wave transmitter to provide directional charging in the 80-100cm range. So the first improvement over this solution is the longer distance the charging equipment could be. But even this technology offers a much greater distance than the current Qi technology.

The previously announced solution meets modern security requirements. If there is an obstacle between the charging device and the transmitter, the process will pause.

Other Companies Offer Their Own Solutions

Apart from Motorola, there have been others demonstrating their own approaches. Among them, we should mention Xiaomi and OPPO.

Xiaomi will design a special charging pile coming with five-phase in-built interference antennas. They will detect the location of the smartphone. To get power to the phone, Xiaomi also includes a phase control array of 144 antennas. The rest of the antennas will transmit millimeter-wide waves via beamforming to the smartphone. OPPO’s air charging technology reaches 7.5W of out power, which is slightly higher than Xiaomi’s 5W. But in other aspects, all these technologies proceed in the same way.