Do you love Apple? Then rejoice for your favorite company. Do you dislike it? There is cause for grief. And for the majority, what we will talk about is just statistics. According to the report of Counterpoint Research analysts for the first quarter of this year; Apple received 42% of the profit among all companies that produce mobile devices. High prices for smartphones allow it to earn indecently much.

It so happened that despite all the skepticism about the success of the iPhone 12, it was it who set the tone and was the headliner of the company’s sales. Its models became the best-selling models on the market in the first quarter of 2021, and the company managed to earn the most from the sale of the iPhone 12 Pro Max.

“Silver” and “bronze” were taken by the iPhone 12 and iPhone 12 Pro. This trio managed to “chop off” 32% of the revenue of the smartphone market in the first three months of this year. Apple also managed to make money on the sales of the iPhone 12 mini at 2% of the world’s revenue.

In terms of pieces, the table of ranks looks a little different: iPhone 12, iPhone 12 Pro Max, iPhone 12 Pro and iPhone 11. The fifth-place went to Redmi 9 A and the sixth was Redmi 9. From the seventh to tenth places were taken by Samsung Galaxy A12, Redmi Note 9, Galaxy A21S and Galaxy A31. 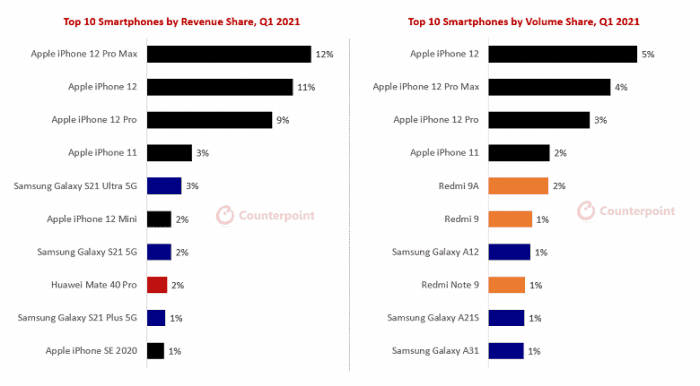 The upcoming Apple Watch Series 7 smartwatch will receive a radically redesigned design; with flat side edges in the style of iPhone 12 and a new green case. This was announced today by reliable insider Jon Prosser, who has repeatedly reported reliable information about upcoming Apple products.

Prosser is confident that as part of a large-scale redesign that has affected or will affect all devices of the “Apple” company, Apple is going to update the Apple Watch, the design of which has not undergone tangible changes since the launch of the original watch in 2015. According to an insider, one of the main design innovations will be the flat edges of the case. The current Apple Watch Series 6 has rounded edges, like the iPhone of previous generations, but Prosser is confident that now the company will bring the design of all branded devices to a single standard.

An insider suggests that the new smartwatch will receive a range of vibrant new colors. But the dimensions of the display will remain the same. To illustrate his point, Prosser shared high-quality renders of the Apple Watch Series 7; based, he says, on real-life images of the device’s prototypes.