Oppo is well known for launching at least two Oppo Reno smartphones every generation. The company, then, continues launching other variants with Z, Lite, or another moniker. Since the Oppo Reno5, the company decided to add a Pro Plus variant, so now we have three regular smartphones and a bunch of differently named variants. Nearly six months after the release of the Oppo Reno5 series, Oppo is gearing up to introduce its Oppo Reno6, Reno6 Pro, and Reno6 Pro+ in China. As usual, the company is also preparing other variants and the first reports about an Oppo Reno6 Z 5G started to appear. 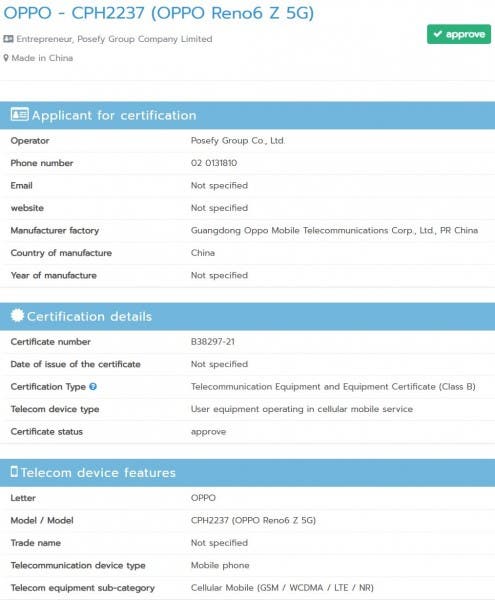 The Oppo Reno6 Z 5G was spotted today at Thailand’s NBTC certification. The device rocks the CPH2237 model number and also appeared at Malaysia’s SIRIM certification recently. Unfortunately, the Thai certification does not include any specifications of the Reno6 Z 5G. However, if we take the Reno5 Z as an example it was a rebranded Oppo F19 Pro+ 5G rather than a new smartphone. The device came with slower charging an NFC chip onboard. The Oppo Reno6 Z 5G may be close to the vanilla Reno6 or be based on other existing smartphones. We will have to wait until tomorrow to know if Oppo will also disclose its Reno6 Z 5G alongside the vanilla and Pro models.

For a quick comparison, let’s dive into the specifications of the Oppo Reno5 Z. The device carries a 6.43-inch AMOLED punch-hole display with an FHD+ resolution of 2,400 x 1,080 pixels. The handset also has a 20:9 aspect ratio, 430 nits brightness, a 60Hz refresh rate, and a 135Hz to 180Hz touch sampling rate. Finally, the display has a screen-to-body ratio of 90.8 percent and an in-display fingerprint scanner.

Under the hood, the Oppo Reno5 Z carries a MediaTek Dimensity 800U chipset. The chip is paired with 8GB of LPDDR4X RAM and 128GB of Internal Storage. Unlike other Reno5 variants, the Z came with a microSD card slot for further memory expansion. The device runs Android 11-based ColorOS 11.1.

In terms of optics, the Reno5 Z came with a 16MP selfie camera. Moving around to the back, the device has a Quad-Camera system with a 48MP primary camera. It also has a 119-degrees 8MP ultra-wide-angle camera, a 2MP depth assist lens, and a 2MP macro camera. The Reno5 Z draws power from a 4,310mAh battery with support for 30W VOOC Flash Charge technology. The other features on the device include dual SIM support, 5G, Wi-Fi 802.11ac, Bluetooth 5.1, GPS, NFC, USB-C, and a 3.5mm audio jack.

We expect the Oppo Reno6 Z to not be much beyond the Reno5 Z in terms of specs, it should adopt a similar design and upgrade the chipset and fast-charging technology.2

Next Nubia Red Magic 6R will come with a 144Hz display