Samsung revolutionized its smartphone business with the arrival of the Galaxy A and M series in 2019. The company further consolidated its name as one of the strongest brands in the mid-range department last year even knocking Xiaomi out of the throne in India. This year, Samsung wants to give bold steps in the segment by bringing 5G to its low-end and mid-range departments. The company already unveiled a couple of mid-range smartphones with 5G such as the Galaxy A52 5G, A72 5G, and M42 / A42 5G. Now, the company is moving forward to bring one of its cheapest ever 5G smartphones – The Galaxy A22 5G.

According to rumors, the Galaxy A22 5G will not go official before June, while some reports were even suggesting it for July. The fact is that the device has been leaking a lot lately. This seems to be a standard for Samsung smartphones nowadays since the Galaxy A52 and A72 also leaked for months prior to their release in March. The latest advancement regarding the Galaxy A22 5G has to do with its retail price in Europe. 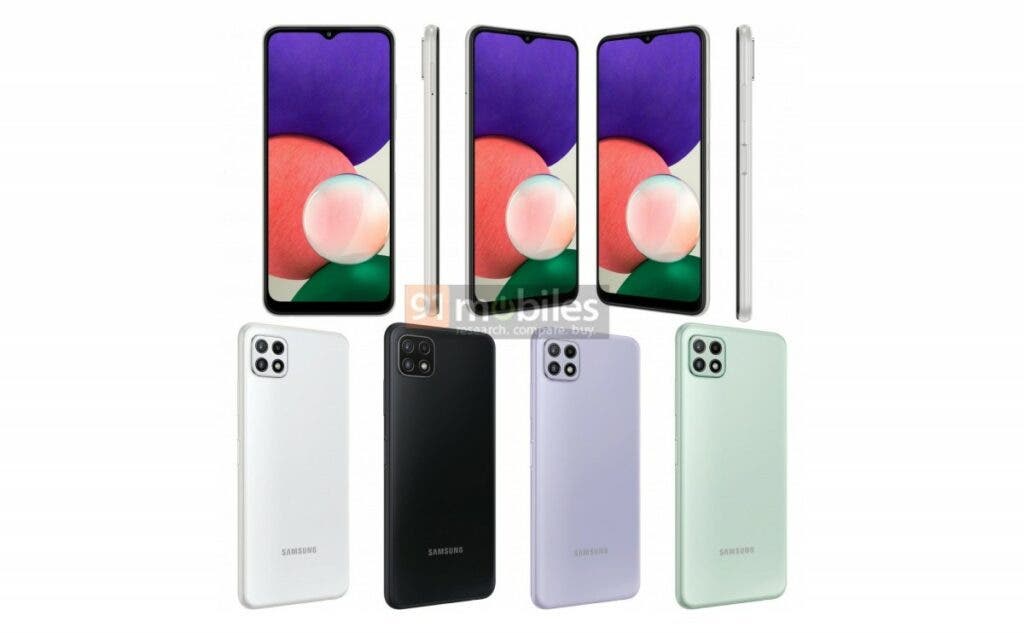 While the smartphone is yet to go official, a supposed retailer listing from the EU has pretty much confirmed that the Galaxy A22 5G will be Samsung’s cheapest 5G smartphone so far. This isn’t a big surprise, but it’s interesting to see this confirmed. The Galaxy A22 will retail at 185 Euros sam VAT. It implies a final price, inclusive of the tax, of around 229 Euros. Of course, this will depend on the country. Some nations may even see the price going below, however, we don’t expect it to come below 199 Euros.

Interestingly, Samsung has another 5G smartphone in Europe reaching “affordable” price tags. The Galaxy A32 5G is sold in the region for around 238 Euros at the moment. However, it was launched at an initial price of 279 Euros. So, this suggests that the Galaxy A22 5G may even go below 200 Euros in a couple of months.

Thanks to leaks we already know some of the specifications inside the A22 5G. The smartphone comes with a MediaTek Dimensity 700 chipset at the helm. It also has 64GB of Internal Storage plus microSD card support. It flaunts a 6.4-inch FHD+ LCD and a Triple-Camera array with a 48MP primary camera, a 5MP macro camera, and a 2MP depth sensor. The handset has a 5,000mAh battery and 15W charging support.

We expect more details in the coming weeks as the launch seems to be imminent at this point.