Apple recently unveiled its iPad Pro and it has taken the crown of the best tablet of 2021 for now. However, Samsung is preparing a new contender that may take Apple’s throne. Of course, for those who aren’t too oriented to Apple’s ecosystem. So far, Apple still provides a better experience than Android in large-sized products. But companies such as Samsung have been offering a solid system experience to justify the use of large-sized devices and also have the S-Pen as a notable accessory to make these devices more interesting. Getting back to the point, Samsung may unveil a new Galaxy Tab S8 Ultra with this year’s S8 series. The device will take on iPad Pro 2021 with a massive display and massive battery.

The Samsung Galxat Tab S7 series was the company’s first real contender to the iPad Pro. However, if the new rumors end up being true, then the company is making a lot of improvements to dethrone Apple. Worth noting that these rumors are a bit sketchy right now, so you will need to digest them with a pinch of salt.

The new leak comes straight from the tipster @FrontTron (via XDA-Developers). The tipster has been following these leaks since Korea. He spotted a series of posts by a user on Naver, South Korea’s largest online platform. Samsung allegedly sent out a survey to users asking them for their thoughts on the company’s upcoming tablet products. It’s not unheard of for a company to probe users through an online survey and reveal product information in the process. If you recall, Google revealed the price of the Pixel 4a and Pixel 5 using this strategy. Of course, this information may not directly reflect actual products in the pipeline. That said, the survey reveals a lot of info regarding the Galaxy Tab S8 series.

Samsung is no stranger to making big tablets since it already did the Galaxy View and View 2 with 18-inch and 17-inch displays. However, most tablets that are meant to be handheld didn’t pass the 13-inch mark. Here comes the surprise! Samsung has trimmed down the bezels to achieve an impressive 92% screen-to-body ratio. It might justify this Galaxy Tab S8 Ultra model’s massive screen size. The company may deliver a device that feels like a 13-inch, or even 12-inch device due to the small bezels. 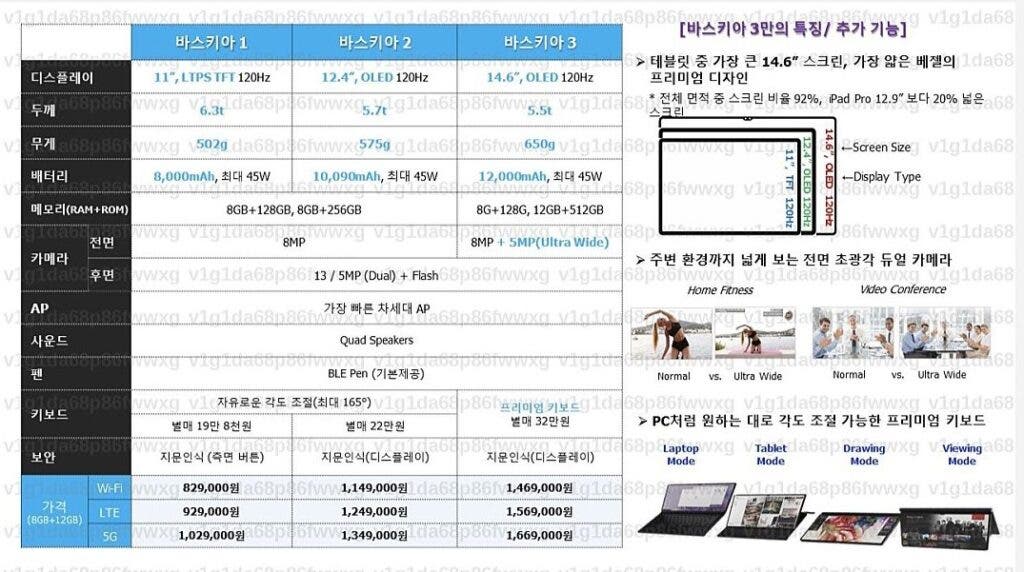 The tablets in the Galaxy Tab S8 series are not only big. They are also thin and light if this leak is accurate. The regular model will come with a 6.3mm thickness and weight of around 502 grams. The Plus variant will be 5.7mm thin and will weigh 575 grams. The Ultra model, on the other hand, will measure 5.5mm in thickness and weigh just 650 grams. The larger display of the Ultra model allows Samsung to spread components out more, reducing the thickness.

When it comes to battery life, the Galaxy Tab S8 Ultra will come with a shocking 12,000mAh battery. The Plus model will have a 10,090mAh unit while the regular variant will have “just” 8,000mAh. All three tablets will have support for 45W fast charging. The devices will likely come with Android 11-based One UI 3.5. The leak also shows many advanced DeX features.

The performance will be ensured by a Qualcomm Snapdragon 888 chipset. The basic and Plus model will come in two configurations with 8GB of RAM and up to 256GB of Storage.  The Galaxy Tab S8 Ultra may offer an additional option with 12GB of RAM and 512GB of Internal Storage. Samsung will equip its tablets with Quad-Speakers tuned by AKG. There will be also a fingerprint scanner underneath the display. The company is expected to launch a new keyboard model that will be compatible with the new display size. All three will come with an S-Pen. The tablets will come with a 13MP main camera and a 5MP ultrawide unit in the rear. All three models will bring an 8MP selfie shooter, but the Ultra will have an additional ultrawide camera with a 5MP resolution.

Next iPhone 12: Brazilian wins lawsuit against Apple and wins charger