Computex 2021 kicked off in Taiwan with a speech by AMD CEO Lisa Su. Her performance attracted attention in two ways. First, the onboard multimedia of the updated Tesla Model S and Model X will receive discrete graphics with RDNA 2 architecture and a Ryzen APU. It seems that AMD has managed to squeeze out NVIDIA, whose solutions were previously used in Tesla electric vehicles.

The second aspect is more interesting for fans of mobile devices. The AMD executive announced that the high-performance GPU RDNA2 is entering the mobile market. In particular, AMD has granted Samsung a license to use the new graphics, which will find its way into flagship smartphone chips later this year. The South Korean giant will announce details about the new platform before the end of the year.

AMD RDNA2 is expected to be part of the Exynos 2200 chip, which will form the basis of the Galaxy S22 series flagships, as well as Samsung ARM Windows 10 laptops. In terms of processor performance, the Exynos 2200 will outperform the Exynos 2100 by 10%, but according to the graph, the power increase was a whopping 150%. Whether this forecast will come true, we will find out closer to the end of the year, when the premiere of the first Samsung processor with AMD graphics will take place. 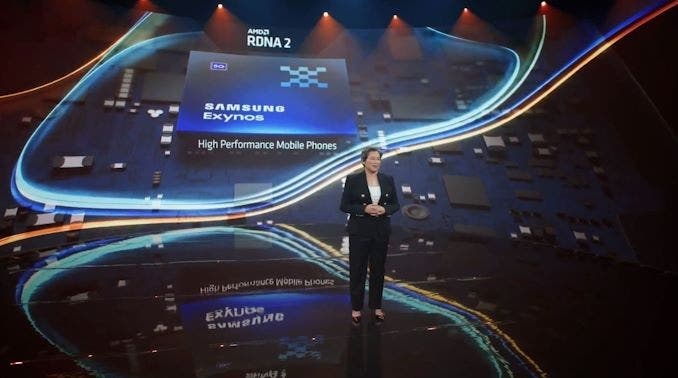 According to previous reports from The Korea Economic Daily, citing industry sources; Samsung will unveil its own laptop processor in the second half of this year. The chip will be the Exynos 2200 and will be 5-nm process technology SoC.

Note that the processor will be in use not only in laptops; but also in smartphones, offering a qualitative balance between performance and energy efficiency. If the processor reaches the market; Samsung will be the first modern Windows laptop manufacturer to also make its own CPUs for them. According to sources, the processor uses the ARM architecture and will be made in the form of a SoC – a system on a chip that combines computing cores, a graphics subsystem and all the necessary controllers. Samsung is developing the graphics core in cooperation with Advanced Micro Devices (AMD).

“The new Exynos will offer enhanced functionality; as well as extraordinary computing performance and energy efficiency through its 5nm manufacturing process. The chip will become an excellent base for both laptops and smartphones, ” The Korea Economic Daily reported.

Next WiFi 7 Is On The Way: Qualcomm And Others Are Already Making Chips