Pressure on Huawei peaked last year and prompted the sale of the Honor sub-brand. Now the independent company is trying to get back into the game; and will unveil the Honor 50 line on June 16; which should mark a return to its partnership with Qualcomm and Google. Naturally, the release of this line will not end, the company is preparing for the announcement of the Honor X20.

However, it is unlikely that this model will debut at the same time as the Honor 50; another release date is also in preparation for it. In favor of the fact that the company is preparing for the release of Honor X20, a photo of the smartphone, which appeared on the network thanks to the famous network insider Digital Chat Station, speaks. 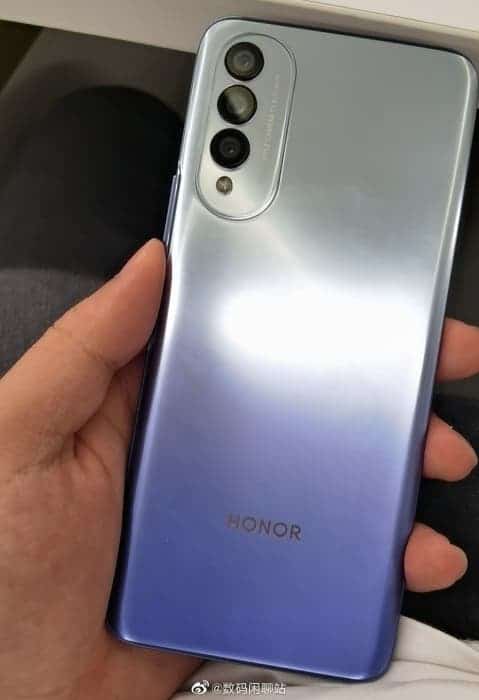 In front of us is a smartphone with a purple-gray gradient; which received an oval main camera block with three image sensors. The main one should be with a 64-megapixel resolution.

The Honor X20 is rumored to be equipped with a 6.7-inch IPS screen with a 120Hz refresh rate and a 4200mAh battery with 120W fast charging. Perhaps one of the advantages of the device is the possibility that it will be based on the Dimensity 1200 chip; whose performance is comparable to the Snapdragon 870.

Honor quickly responded to rumors recently that its products were not authorized to work with Google’s Android operating systems. Reporters argued that for this reason, Honor will not be able to sell its products outside the PRC and will ship fewer smartphones than planned.

Honor has already issued a statement claiming that rumors about Google’s lack of authorization to use the Android OS are false. Moreover, according to the company, on May 28, it successfully joined the GSMA; which brings together mobile operators and electronics manufacturers from around the world.

Since independence from Huawei, Honor has 8,000 employees, including developers, sales, purchasing, marketing, and manufacturing. Earlier, the company’s CEO Zhao Ming announced that the company will fully restore the chip supply chain from June.

Since gaining formal independence, the manufacturer has been gradually restoring contacts with partners and suppliers; including AMD, Qualcomm, Samsung, Microsoft, Intel and MediaTek, and in the second half of the year, Honor even intends to release smartphones based on the flagship Snapdragon 888 / Pro chipsets. In addition, the Honor 50 with Snapdragon 778G 5G should go on sale in June. According to company representatives, the new product will already have pre-installed Google services.