Apple is the undisputed leader in the global smartwatch market. Aggressive marketing, understanding of market needs and memorable branding have led it to such success. According to Counterpoint, Apple’s wearable market share rose to 33 percent in the first quarter of this year. The research company decided to find out how much it costs Apple to manufacture the current Apple Watch Series 6. It turned out that the cost of manufacturing them is only $ 136 while apple is selling them starting at $ 399.

According to Counterpoint Research, 68% of the device’s total cost is in the processor, display, sensor set, and watch case. Apple Watch Series 6 uses an OLED matrix made using LTPO technology. Its maximum brightness reaches 1000 cd/m2 . Apple removed the Force Touch layer from this watch, making the display module 0.3mm thinner. The combination of a screen, touchpad, and ION-X tempered glass covering them accounts for roughly 13.2 percent of the watch’s value.

The new Apple S6 System-in-Package (SiP), which Apple claims is 20% faster than the Series 5 platform, contains two 1.8GHz Thunder A13 cores, W3 wireless controller, and U1 ultra-wideband chip. The amount of RAM is 1 GB, and the capacity of the flash drive reaches 32 GB. SiP S6 accounts for about 23.7% of the device cost. 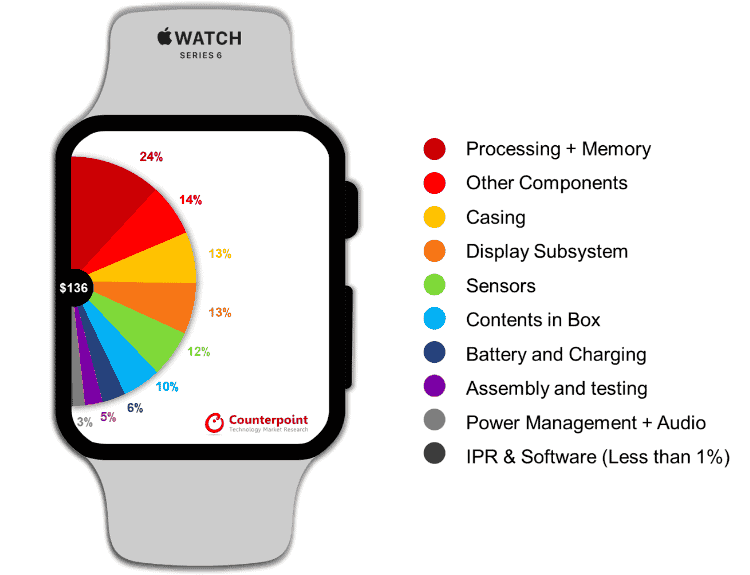 The speaker gets an improvement as well, with Apple claiming it to be 50% louder. The Digital Crown, which is an integral part of Apple Watch, provides haptic feedback with the help of Taptic engine. This engine takes up around 35% of the space inside Apple Watch. The latest Taptic engine is more robust in comparison with the former. With the battery size amounting to 303.8 mAh, it is a minor increase of about 7.8mAh from the previous Series 5. Apple also provides fast charging in the Series 6. Battery and the wireless charging coil in the smartwatch amount to about 6% of the total BoM cost.

The rest of the $ 136 is generated by the costs of assembly and testing, packaging and its contents, and other costs. It is noteworthy that the development and software component of the watches form less than 1% of their cost.

It is worth noting that the miniaturization of Apple Watch components and their improvement leads to an increase in the price of the device. The next generation of watches will bring the first major design update in its history; as well as a number of new sensors and software features.