Realme is gearing up to introduce a bunch of new smartphones in the next few months. Apart from bringing the Realme GT to global markets, the company will also introduce a new camera-centric Realme GT variant. The brand is also preparing a bunch of new mid-range and premium mid-range smartphones. Among them, we have a new 5G smartphone that carries the Realme RMX3366 model number. The device has just appeared on TENAA certification with key specifications. In addition, the leakster Digital Chat Station on Weibo has disclosed that this upcoming Realme smartphone will feature a Snapdragon 778G.

The Realme RMX3366 surfaced on TENAA with key specifications. The listing reveals a 6.55-inch display. According to the leakster Digital Chat Station, this will be an OLED display with a Full HD+ pixel resolution. Presumably with 2,400 x 1,080 pixels. While it makes sense to expect a high-refresh-rate screen, this can’t be assured right now. If you recall Realme has equipped its Realme 8 Pro with a 60Hz screen, so everything will depend on the pricing point of the Realme RMX3366. With an LCD we could easily expect a high-refresh-rate, but since it’s OLED we can’t affirm right now.

Under the hood, the smartphone has the Qualcomm Snapdragon 778G. The company also revealed that this smartphone bears the “Quicksilver” codename. The Snapdragon 778G comes with four ARM Cortex-A78 performance cores clocked at 2.4GHz, and four ARM Cortex-A55-based efficiency cores clocked at 1.8GHz. We expect multiple RAM and Storage configurations to accompany this chipset. 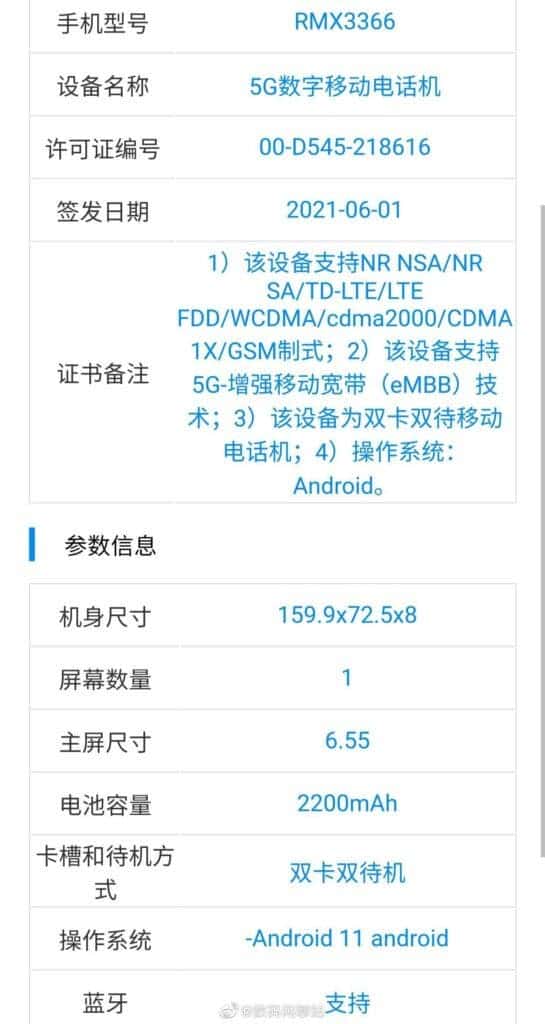 The handset will offer a 5G chip which is hardly a surprise judging by the chipset. Another fact that isn’t a surprise is the availability of Android 11 with Realme UI 2.0 running on top. The package will be fueled by a 4,500mAh battery. Interestingly, the leak mentions a 2,200mAh battery. We know that this probably has to do with a dual-cell battery implementation. This is basically a requirement for Realme’s 65W fast-charging technology, so it’s safe to assume that it will be there. Unfortunately, we don’t have many details regarding the Realme RMX3366 just yet. However, we expect more details to appear in the coming weeks.

We are particularly curious to see what marketing name Realme will give for this handset. Also, we’re expecting to learn more about the camera configuration in this handset. Hopefully, more details will appear in the coming days.