In iOS 15, Apple has made some improvements to the photo app. For example, you can see the EXIF ​​data of the photo. This function is implemented through a new “Information” button. The new feature provides a title field for the selected photo. The title field reveals where the image was taken and other information. In addition to the above, if a picture was not taken with a mobile phone camera, the information button will also tell the user which application on the device the picture was saved from. For example, in the screenshot below, you can see that the HomePod picture is saved from the internet through Safari. 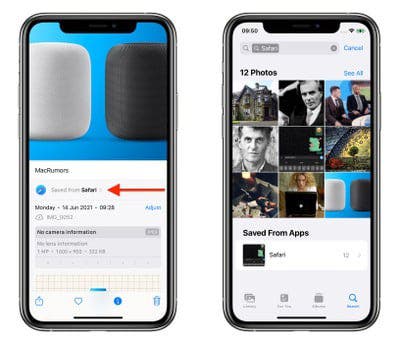 This metadata information is also like an organization tag. Thus if you click on the “save from” location in bold, the photo app will filter the photo library to show any other images saved from the same app. This way, it will be more convenient to find some pictures. As of now, the early developer beta version of iOS 15 is already available. According to the company, the public beta version will be available next month. As for the official stable version of iOS 15, users will have to wait until this fall.

Presently, developers are working with the iOS 15 system thus new features of this system hits the web daily. According to recent reports, this system adds a very useful feature. With the iOS 15, users can drag pictures and text across applications to complete a copy/paste operation.

This feature is not entirely new, the iPadOS already has this feature. However, it is the first time that it is coming to iOS. According to the demo video, the user can select a picture or a paragraph of text from an application, and drag the material to another open application without releasing it after a long finger press. After releasing your finger, the text or picture will automatically insert into the edit box of another app. After copying the text or image, iOS 15 will prompt where to insert this text or image with animation. The system will also display the positioning cursor.

Apple’s iOS 15 is compatible with iPhone 6s/6s Plus/SE and later mobile phones. The new version of the system has upgraded FaceTime, redesigned apps such as maps, weather, wallets, etc., to further improve the level of support, and it is more conducive for protecting users privacy.