Google’s own Pixel smartphone series is a niche market. This is because it can get the Android system update as soon as possible. Also, Pixel smartphones come with excellent camera algorithms and it has a small number of loyal users. Google is expected to launch the Pixel 6 series in the fourth quarter of this year. According to reports, this new series will have two models – Google Pixel 6 and Pixel 6 Pro. Today, we have a view of the protective case of the Google Pixel 6 and Pixel 6 Pro. 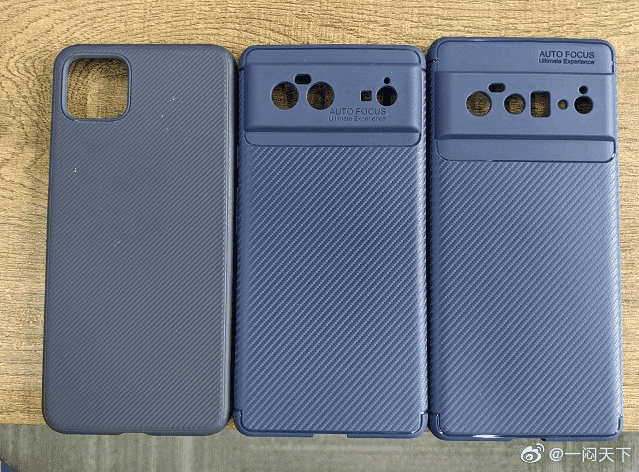 As we can see from the images, the Pixel 6 and Pixel 6 Pro protective cases are similar in shape. Both cases use a “camera-mounted” design, similar to the previous Galaxy S10 series layout. However, the matte design and shape look like an explosion-proof shield. The Google Pixel 4 XL (image on the left) was the last Pixel phone to use a similar protective case.

In terms of details, the difference between the Pixel 6 and Pixel 6 Pro lies in the camera. Google Pixel 6 Pro seems to be equipped with a periscope telephoto lens. With Google’s self-developed algorithm, its imaging performance is expected to be significantly improved compared to the previous generation, Pixel 5.

One of the earliest looks at the Google Pixel 6 series was from @jon_prosser. The leaks show that the Pixel 6 series uses a center punch-hole screen with a fairly large aperture. On the rear of both smartphones, there is a black ribbon-shaped horizontal bump that holds the rear camera. While the Pixel 6 has two cameras and one LED flash on the rear, the Pixel 6 Pro has three cameras and one LED flash. From the renders, these smartphones will come with an on-screen fingerprint sensor.

The renders also show that the Pixel 6 series will have three colour combinations. The horizontal bar that holds the rear camera uses black colour while on top the ribbon has a dark orange colour. Under the ribbon has two possible colours. There is the white version as well as the light orange colour option. Both options come with the Google logo on the rear. The white colour version is for the Pixel 6 while the light orange rear is for the Pixel 6 Pro.