Transsion Holdings is a Chinese conglomerate that made its name with brands such as Infinix, Itel, and Tecno. The company acted in the African and Asian markets with budget smartphones, however, it has been expanding its business since the last year. Infinix and Tecno have been launching multiple smartphones in the mid-range department, but are yet to enter the flagship segment. This will change very soon according to a new leak. According to a report, Infinix is working on a very promising smartphone with the industry’s leading fast-charging technology and other premium aspects.

A new Infinix smartphone had its design leaked by XDA-Developers. Judging by the renders, the Infinix smartphone is online any other device the company has ever launched. The smartphone flaunts a bezel-less design with curved edges, something that isn’t easy to do with a common LCD, so we assume the company is working with AMOLED here. The display has a top-left-aligned punch-hole and it sports a square-ish design with smoothed edges. The design makes me remember some Lumia smartphones such as the Nokia Lumia 950 (save for the minimalistic bezels, of course). 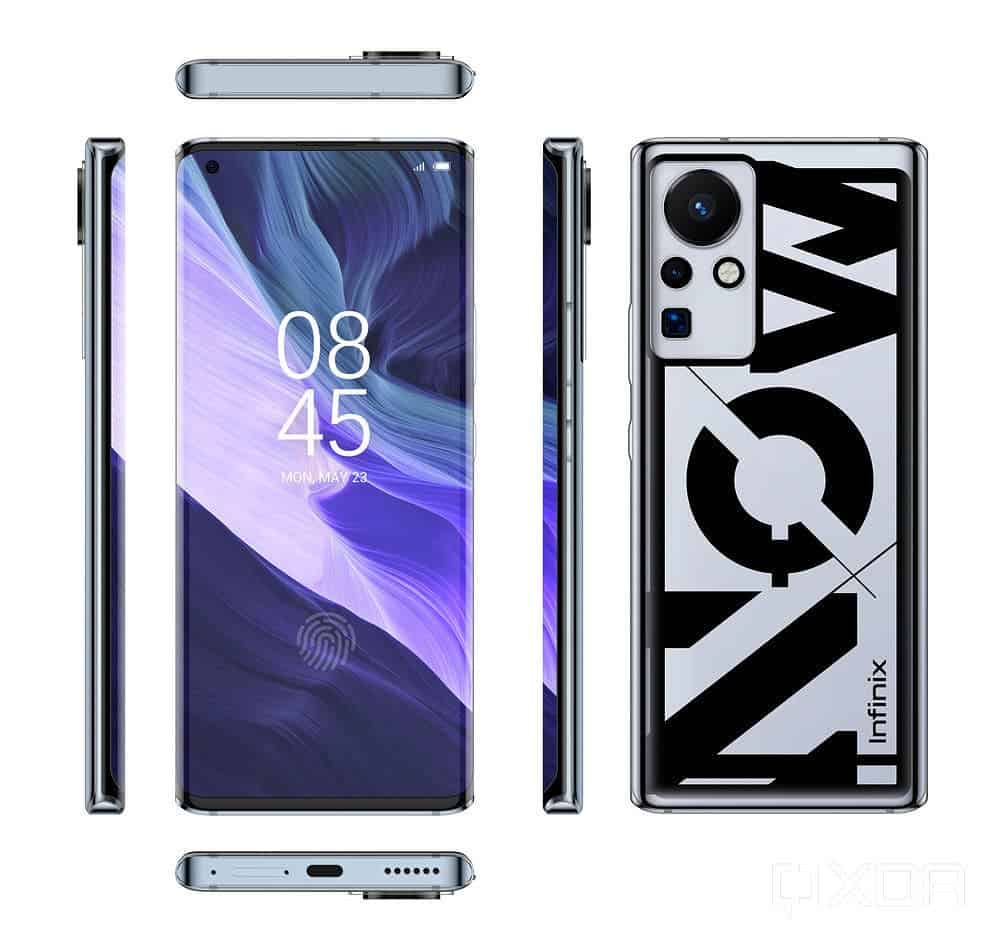 The renders also reveal a Rectangular camera island that comprises a very unusual arrangement of cameras. We have a massive camera on the top, a smaller unit below, and a periscope camera in the bottom part. It also has a large LED flash. The device also sports a huge “NOW” logo that covers the entire back alongside a smaller Infinix logo. Could be this device dubbed Infinix Now? Only time will tell. One thing is sure, Realme’s “DARE TO LEAP” is teaching a thing or two to some companies in terms of design.

The handset will also sport an in-display fingerprint scanner which further confirms the possibility of an OLED display in this phone. The bottom serves as a home for the USB-C port that sits alongside the speaker grille. The power and volume keys are located on the right edge of the smartphone.

One of the most intriguing facts in this report is that it suggests a 160W fast-charging support. An image of the 160W Ultra Flash Charger has also leaked in the past. This represents a huge upgrade for the company. The Infinix Zero 8 for instance has 33W fast charging. This 160W charging has the potential to be an industry-leading technology. Honestly, it makes us think if this device will really come as it is looking “too good to be true” right now.

Other tech giants are starting to play beyond the 100W charging department. Xiaomi has recently revealed 200W HyperCharge technology, but this is some miles away from becoming commercially available. Could be Infinix ready to surpass most of its competitors in fast-charging tech? We expect to hear more about this device in the coming weeks.

Next New upgraded MOOSOO K17 Pro up for grabs on Amazon

Vivo X90 Pro Plus Camera Samples Are Out, It’s A Big Threat To Apple, Samsung Huawei And Pixel Cameras