Vivo unveiled three Vivo V21 series smartphones in April – The Vivo V21e and Vivo V21 in 4G and 5G flavors. While users of the standard variant could choose between 4G or 5G chips, those with the V21e were stuck with the Snapdragon 720G chip which is 4G only. Back in the last week, Vivo confirmed that it was working on a 5G model for the “e” variant. The device will be revealed in a couple of hours, but its specifications have leaked in fully. Without further ado let’s dive into the Vivo V21e 5G specifications.

One of the most notable changes in the 5G version is that Vivo is dropping the triple-camera setup. Instead, the company is coming with a dual-camera setup. It’s not common to see dual-camera smartphones in the premium mid-range department anymore. Still, we have two useful cameras and that is what matters. The company equipped the module with a 64 MP main camera and an 8 MP ultrawide module. The 2MP macro is missing here, but it’s not a deal-breaker. The selfie camera is being downgraded from 44 MP to 32 MP.

The device flaunts a 6.44-inch AMOLED display with a Full HD+ resolution with 2,400 x 1,080 pixels and a 20:9 aspect ratio. This is a waterdrop notch display that comes with SCHOTT glass protection. Unfortunately, we don’t have HDR10 and the display refresh is capped at 60Hz. Under the hood, the phone swaps the Qualcomm Snapdragon 720G of the 4G variant for a MediaTek Dimensity 700 chip. This chip features Two ARM Cortex-A76 cores clocked at up to 2.2 GHz plus six power-efficient ARM Cortex-A55 cores clocked at up to 2.0 GHz.

The device has a sub-6 5G modem that promises download speeds of up to 2.77 Gbps. Just like its 4G sibling, this model comes with 8 GB of RAM and 128 GB of Internal Storage. You can easily expand it with a microSD card slot. Moreover, Vivo’s Android 11-based FuntouchOS 11 includes the extended RAM feature which allows you to add 3G of virtual RAM. 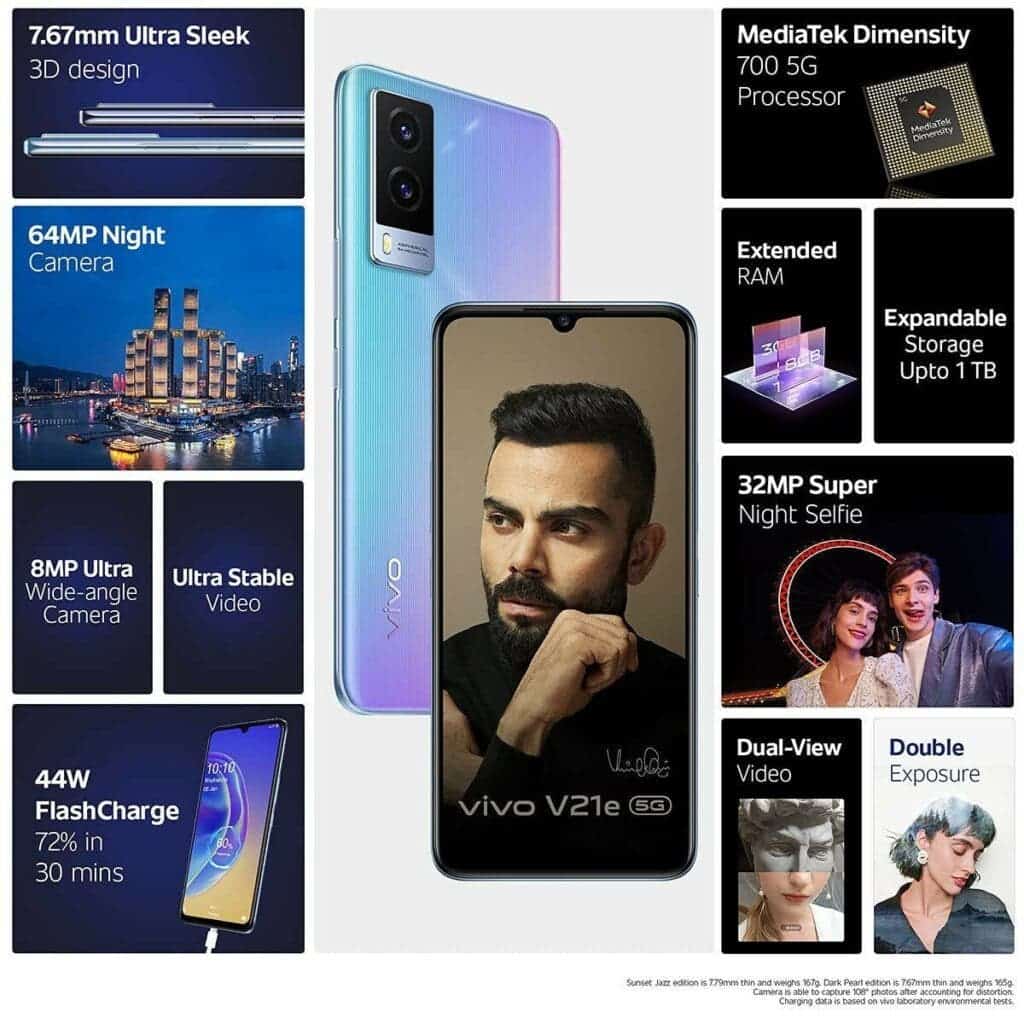