Strategy Analytics reports that a landmark event took place in the global smartphone market in June this year. Now half of the world’s population uses a smartphone device.

It is noted that the world’s first modern smartphone was the IBM Simon device, released back in 1994. This was followed by such well-known models as Nokia 9110 Communicator (1998) and Ericsson R380 (2000).

The real boom of smartphones began with the release of the first iPhone in 2007 and the emergence of the Android operating system, the first release of which took place in September 2008.

In 1994, there were only about 30,000 smartphone owners in the world. In 2012, the symbolic milestone of 1 billion users was crossed. And today, every second inhabitant of the Earth has a smartphone device.

As of June 2021, the world’s population is about 7.90 billion people. At the same time, 3.95 billion people on Earth have a smartphone.

In other words, half of the earth’s inhabitants use a smartphone. It took more than a quarter of a century – 27 years to achieve this result.

Neil Mawston, Executive Director at Strategy Analytics, added, “Half of humanity now owns a smartphone. This device is the most successful computer of all time. Smartphones today are in use by 4 billion people worldwide, from urban California to suburban China and rural Africa. Consumers and workers love the convenience, utility, and safety of having a connected computer in their pocket. Smartphones have become an essential daily tool. We predict 5 billion people will be using smartphones worldwide by 2030.” 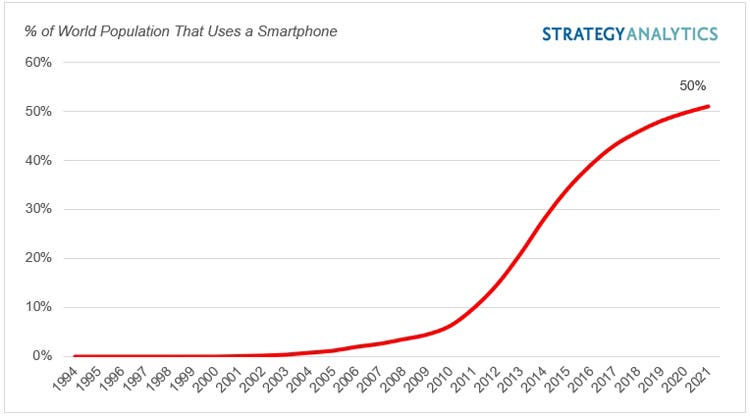 Smartphone sales for the first quarter on 2021

According to analyst firm Gartner, in the first quarter of this year, global smartphone sales grew by 26%. The year-on-year growth was 22%. The pandemic began to recede, and consumers again began to willingly spend money on new devices. But in any case, sales have not returned to their previous level; and the indicators for the sale of mobile phones do not reach the level of 2019.

Samsung remained the leader in the first three months of this year, with a market share of 20.3% and 76.6 million smartphones sold. Apple came in second with 58.5 million iPhones sold. Rounding out the top three is Xiaomi, which controls 12.9% of the market with 48.9 million mobile phones sold. The fourth and fifth positions were taken by Vivo and Oppo, which sold more than 38 million handsets each.

All representatives from the top 5 showed sales growth against the background of the first quarter of last year, but if Apple’s main sales driver were the flagships of the iPhone 12 series, then Samsung and Xiaomi grew primarily due to an increase in demand for budget and mid-range models. Sales of mobile devices were positively affected by the growing demand for 5G-smartphones, which are increasingly increasing their market share.

Previous When will MIUI 13 be released? Information from a Xiaomi representative

Next Samsung Galaxy S21 FE will be launched in selected markets