After years of launching cost-effective smartphones, Infinix is now getting serious. After a very good Infinix Zero 8 smartphone that brought some competition to the mid-range segment, the company is gearing to unveil the best smartphones in its story. The new handsets will come under the Infinix Zero X series all will offer some impressive specifications such as a 160W fast-charging support, 50W wireless charging, a 108MP camera, and a 6.67-inch AMOLED. Ahead of the official launch, the smartphone believed to be the Infinix Zero X has passed through the Geekbench benchmark. The benchmark listing exposes some of the key hardware aspects of this smartphone, one of the most notable characteristics is the MediaTek Helio G95 SoC.

The smartphone passed through the benchmark platform with model number Infinix X6810. According to previous leaks, this particular device is the Infinix Zero X. The phone under the hood as per the benchmark listing will pack the MediaTek Octa-Core Helio G95 SoC (MT6785V/CD). This chip is based on the 12 nm architecture. 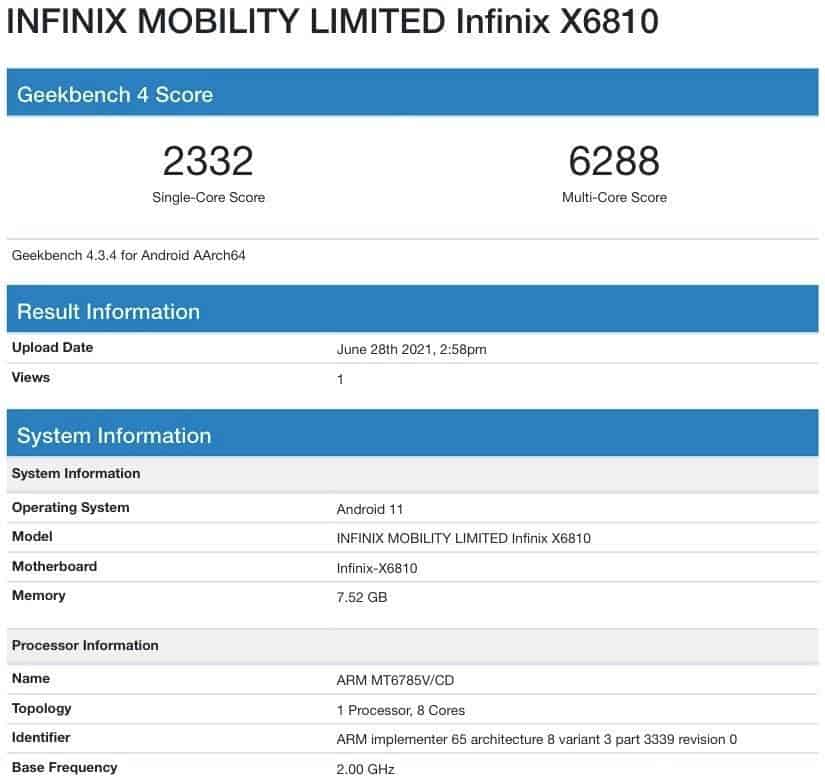 It packs two ARM Cortex-A76 cores clocked at up to 2.05 GHz plus six power-efficient ARM Cortex-A55 cores clocked at 2.0 GHz. The device passed by Geekbench with 8 GB of RAM. On the software front, the handset runs Android 11 and we can expect Infinix HiOS skin to be on top of that. In the benchmark results, the device scored 2,332 points in the single-core tests and 6,288 in the multi-core department.

According to rumors, the handset will flaunt a 6.67-inch AMOLED display with a Full HD+ resolution. We assume this display will offer at least a 90 Hz refresh rate. It will also come with a large rectangular cutout for the triple-camera setup. It has a big 108MP sensor, a secondary camera probably for ultra-wide shots, and a third module that seems to be a periscope cam. The device features a very unique “NOW” logo that covers the entire backplate. Among the most notable features, we have an in-display fingerprint scanner. Other features include 160W fast-charging support and 50W wireless charging.

Interestingly, Infinix used the MWC 2021 to showcase its Infinix Concept 2021. The device offers somewhat similar specs as the rumored Infinix Zero X smartphone. It draws powers from a 4,000mAh battery with support for 160W fast charging. This technology can charge the smartphone from o to 100% in just 10 minutes. The device has around 20 temperature sensors and has 50W wireless charging. The only problem is that something that carries “concept” may be away from a release. So we’re starting to think that the Ifinix Zero X will not bring some of these ground-breaking technologies at all.

Next Windows 10 Features That We Will Miss On Windows 11