Microsoft Windows 11 was unexpectedly released. We thought this was the end of new Windows versions and Microsoft will keep on updating Windows 10. However, it turned out that Windows 10 is not the last major release and we will keep on getting new Windows versions. The reason behind the new launch is not specified. It could be to create the hype again and compete against the new versions of macOS. But the real question is if Windows 11 is any good or not. I have been using Windows 11 as my daily driver for a couple of days now and here is my experience so far.

Installation: It’s not as hard as you think 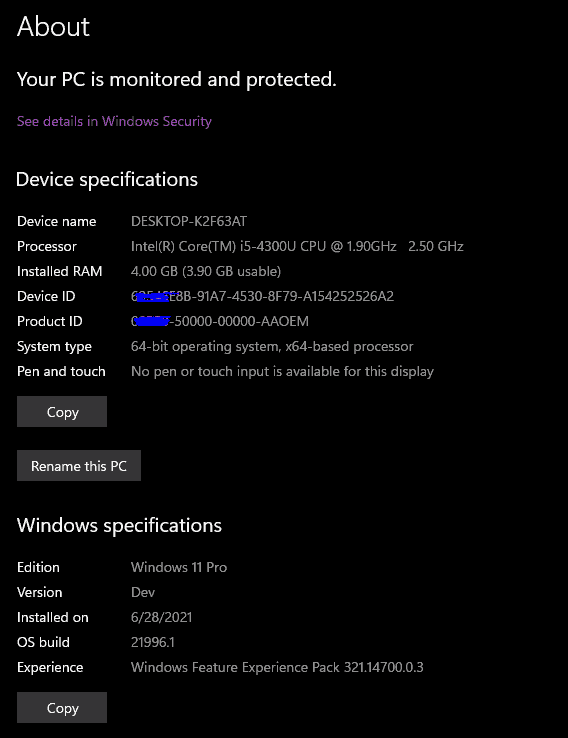 The worst thing about Windows 11 is the bizarre requirements. TPM 2.0 and Secure Boot are required according to Microsoft. But for the leaked dev preview build, I installed it on my years-old Core i5-4300U powered laptop that has TPM 1.2. You can easily install Windows 11 without having the latest TPM 2.0. If your system is around 7 years old, there is a great chance it has TPM 1.2 and it works just fine. The next required; Secure boot is not a big pain. You have to dig in the bios, disable legacy mode and enable UEFI to use Secure Boot. Make sure you are not using UEFI Hybrid as only UEFI is supported. Bios digging is all you need for installing Windows 11.

If you are using Windows 11 Home, there is no chance you can complete the setup without logging into your Microsoft Account. And also, if by mistake you connect WiFi while in setup then again Microsoft account is compulsory. I was installing Windows 11 Pro, and stupidly I connected my WiFI and it didn’t let me skip Microsoft Account login. It is just bizarre in my opinion for a non-Microsoft account user. Here’s a tech tip for you; don’t connect your WiFi while setting up your Windows 11. 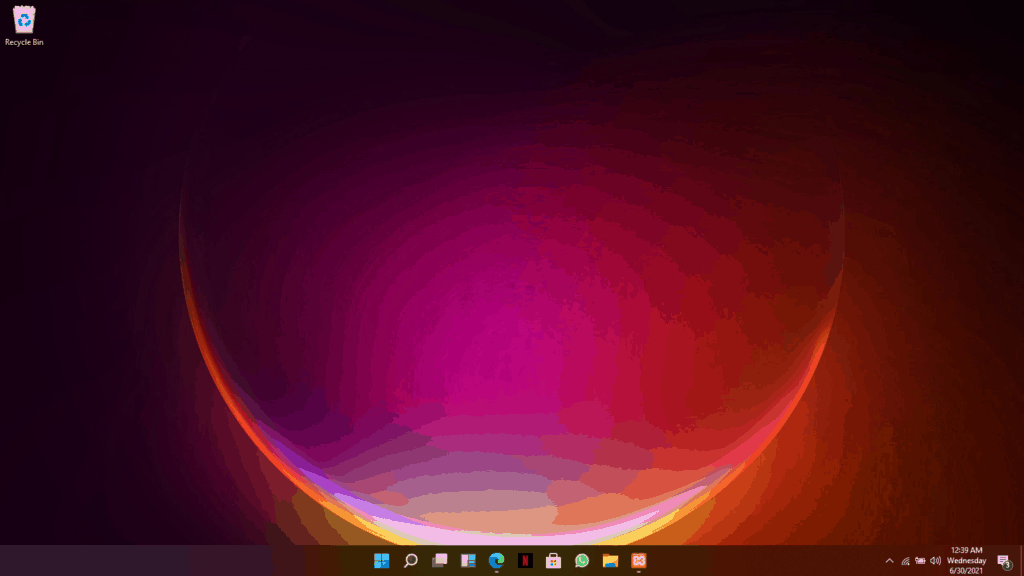 If I could define Windows 11 in two words, it would have been “So Smooth.” Literally, the effects and transitions of Windows 11 are incredible. Rounded corners make Windows 11 aesthetically pleasing.  First of all, let me tell you about the new desktop. It’s simple as it can get. The wallpapers are amazing. Windows 11 comes with six themes including Windows (light), Windows (dark), Glow, Captured Motion, Sunrise, and Flow. My favorite themes are Windows (dark) and glow. The color scheme is just amazing.

The most controversial feature of Windows 11 is its taskbar. By default, the taskbar is in the middle just like MacOS. However, you can change it to left by going to settings. But believe me, you will love the center taskbar. It’s so simple and aesthetically beautiful. From the start of Windows, we have seen the left-aligned taskbar and now seeing it in the middle is so refreshing. Plus, there is a gradient taskbar in the Glow theme which looks super good. 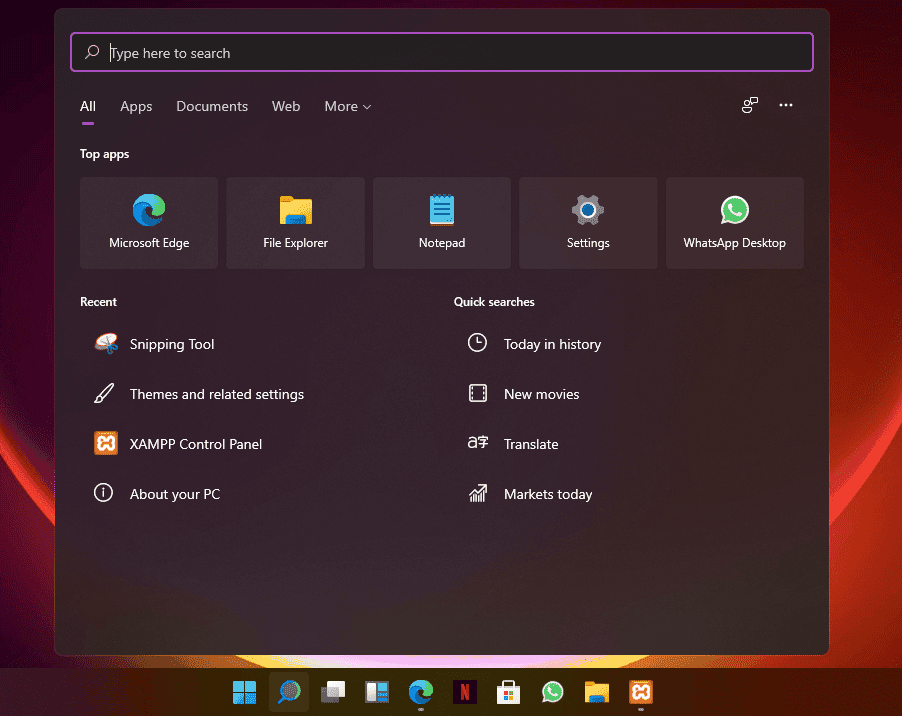 Start Menu has gone a lot more simple. It is now less noisy and shows pinned apps and recommended apps in a small window. By right-clicking on the Windows icon, you can see a list of options including Apps and features, task manager, run, etc. It is easy to access so it’s again a better start menu. Coming to search, it’s now just an icon compared to a huge text bar. You can search for applications as well as browse the web quickly. 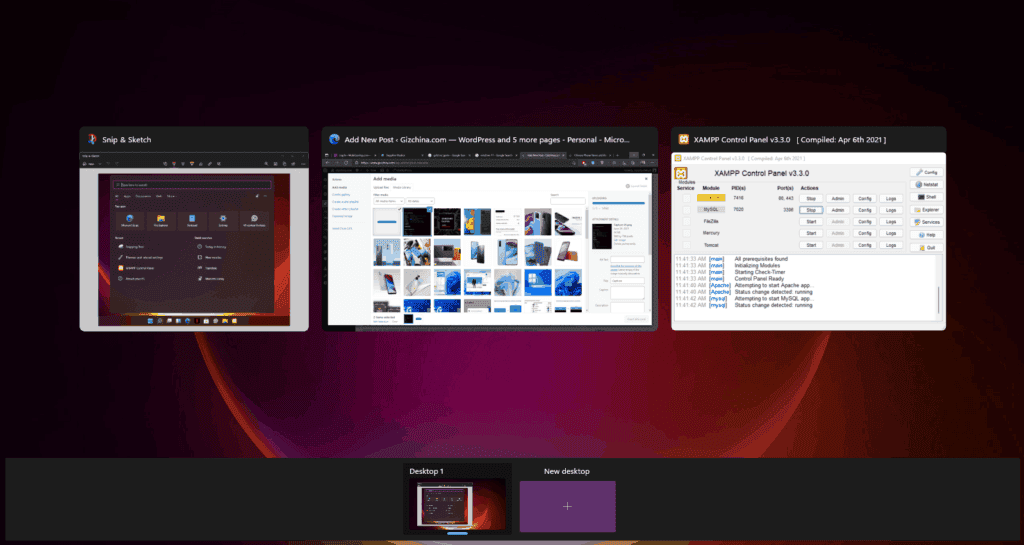 Task View is another great feature of Windows 11. You can easily multi-task thanks to it. Plus, now you can quickly change desktops. You can personalize each desktop accordingly. For example, you can set up a productivity desktop and a gaming desktop. Coming to Widgets, it is not a big deal as Microsoft was making it to be. To be honest, I hardly opened widgets. It tells you about weather conditions, money market followed by Microsoft News. You can personalize news according to your interests.

To my huge surprise, Windows 11 performs better than Windows 10 on my laptop. I first installed Windows 11 in HDD and was surprised to see how quickly it boots up compared to Windows 10. It has great backward compatibility. Windows 10 applications work just fine. I have used applications like Adobe Photoshop, XAMPP, and Visual Studio Code. I faced no issues whatsoever. Do note that this review is coming from an underpowered laptop, so yes no gaming test was performed. In a nutshell, applications will perform better a tad better in Windows 11.

Windows 11 is just a redesigned Windows 10, but that shouldn’t stop you from upgrading. There are several additional features plus this initial review is of the leaked Windows 11 build. And if my experience with this version is good, then I’m optimistic about the final build. For now, I will keep on using this version of Windows on my laptop. I won’t be making a switch as this version is serving me great for now with little to no bugs.