Since the HarmonyOS launch event where Huawei unveiled a couple of devices with HarmonyOS, there have been reports about the Huawei MatePad 11. The latest information on this device shows that the tablet prototype is now at Huawei’s offline stores. Furthermore, a popular Weibo leakster, @长安数码君, claims that if everything goes according to plan, this device will pre-heating on July 4. In addition, the official launch of this device will be on July 6th.

Furthermore, he reports that the Huawei MatePad 11 will come with a 2.5K resolution 120Hz refresh rate display. The 120Hz FullView display actually supports 60/120Hz two-speed adjustment. Furthermore, this device will come with a Qualcomm Snapdragon 865 chip and will support 22.5W charging. However, the memory configuration will only have 64GB, 128GB, and 256GB. On the downside, there will be no LTE (4G) and 5G version, only a WiFi 6 version. Also, there will be four colour options in mainland China but only three colour options globally. The 64GB version has black and silver, 128 has black, silver, and blue, and 256 has green and black. It supports up to ITB expansion. 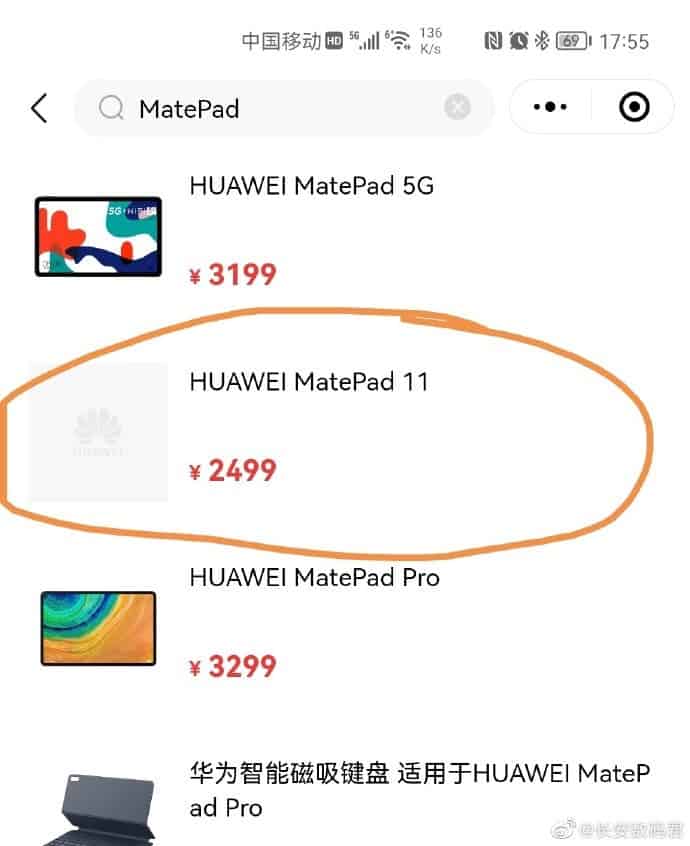 Huawei MatePad 11 price and other specifications

Furthermore, the “Huawei Experience Store Go” has revealed the price of this device. The Huawei MatePad 11 tablet will sell for 2499 yuan ($386). Furthermore, the display of this device has the top-notch TÜV Rheinland dual certification. This is not an easy certification for any device to get. This tablet also comes with four-channel four-speakers. At the same time, it will support the second generation of Huawei M-Pencil.

In addition to the second-generation Huawei M-Pencil, Huawei MatePad 11 will also support the new smart magnetic keyboard. When the stylus is not in use, attach it to the frame of Huawei MatePad 11 to immediately recharge and use.

In terms of ID design, Huawei MatePad 11 will inherit the similar design language of MatePad 12.6. It will come with a full-screen design without openings on the front and a vertical lens module on the back.

Looking at its power, this device will use a built-in 7250 mAh battery with up to 12 hours of battery life and 22.5W charging power. In May last year, Huawei launched the first 5G tablet in the Mate series – Huawei MatePad Pro 5G. The device uses the top Kirin 990 chip at the time as well as a 2K display. The price starts at 5299 yuan $818). We also expect this new Huawei tablet to come with the HarmonyOS out of the box,

Previous Qualcomm says that Huawei is as powerful as Apple

Next Huawei acquires more stake in a chip design company