As usual, Apple will officially release a new generation of iPhones in September this year. Over the past few months, there have been numerous speculations regarding these smartphones. However, a recent leak reveals all that we need to know regarding this series. In fact, the leak also contains price information. According to the leak, the iPhone 13 will have four models, this is already public knowledge. The iPhone 13 series will include iPhone 13 mini, iPhone 13, iPhone 13 Pro, and iPhone 13 Pro Max. 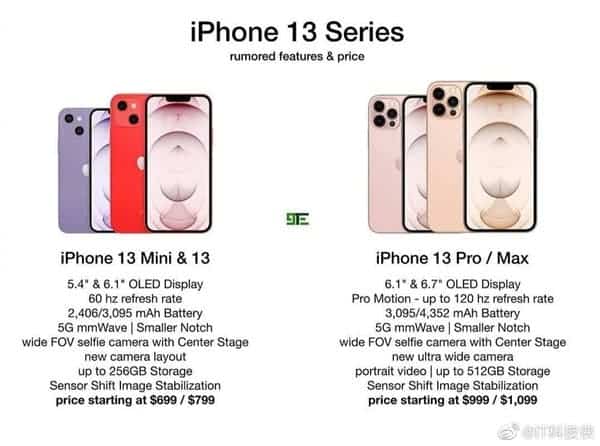 Furthermore, the appearance of the device is one of the most obvious upgrades this year. The model and design drawings that have been exposed multiple times have basically confirmed that the iPhone 13 series will be equipped with a small notch display. This is the first time Apple will reduce the notch area in four years. It will bring a larger screen-to-body ratio and effectively improve the visual effect. 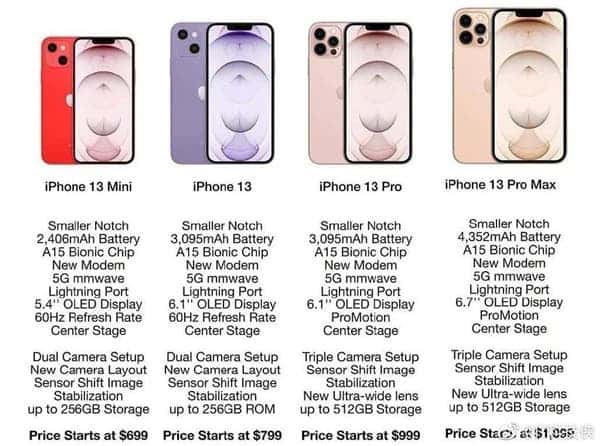 In addition, the entry-level version of the two iPhone 13 may also adopt a new rear camera arrangement. Although it is still a dual-camera configuration, it has been changed from the original vertical arrangement to a diagonal arrangement. Of course, the triple camera version of the Pro models still remains more attractive.

In terms of configuration, the entire iPhone 13 series will be upgraded to the latest self-developed A15 bionic chip. Earlier news claims that the chip still uses the 5nm process, but it has upgraded the second-generation 5nm process of TSMC. This means that it will come with a better energy efficiency ratio and 5G performance. Other aspects of this chip will also be better than the previous generation.