We’re not very sure why companies are coming with these “new year” editions of current smartphones. Earlier this year, Xiaomi launched a Redmi Note 8 2021 Edition, but it was mostly a disappointment than an actual upgrade. Now, Samsung is doing the same with its Samsung Galaxy M21 2021 Edition. The device isn’t really impressive if we compare it with the new 2021 mid-ranges. Still, Samsung is confident that the M21’s legacy will be enough to push a new generation forward. Today, the device had some of its key specifications revealed.

Amazon has just confirmed that the upcoming smartphone will carry Samsung Galax M21 2021 Edition moniker. The new handset will go official on July 21st at 12:00 PM IST. The company has also revealed some of the design languages of the handset. The handset will stick with the original phone’s design bringing a waterdrop notch at the front. The rear part will serve as a home for a triple-camera setup that sits at the top-left position. The phone will also pack a physical fingerprint scanner, which sits right next to the camera cutout. The right side serves as a home for the volume rocker and a power button. The back panel features a stripe design and apparently it is made of plastic. 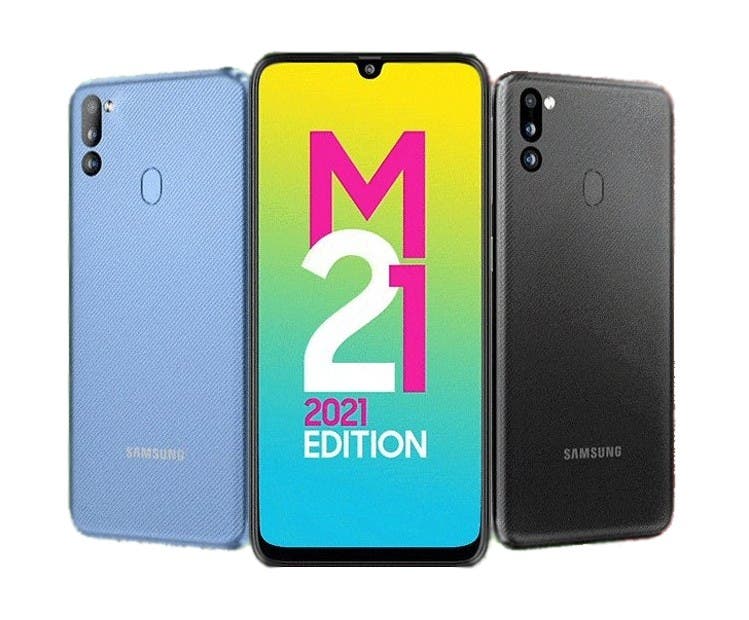 Samsung has already confirmed that the smartphone will come in two colorways – Arctic Blue and Charcoal Black. The handset will flaunt a 6.4-inch Full HD+ display that has AMOLED technology. So it’s safe to assume that it will be totally compatible with the company’s Always On features. In terms of optics, the primary camera is a 48 MP Samsung GM2 sensor. For now, it’s not easy to determine the purpose of the other two sensors. Anyway, rumors suggest that the secondary camera is an 8 MP ultrawide shooter and the third sensor is a 5 MP macro shooter.  Further, it is expected to pack a 20MP selfie snapper. The device will draw its powers from a huge 6,000mAh battery. Hopefully, it will have at least a 15 W charging, otherwise getting this battery charged will be painful.

Unfortunately, there aren’t details regarding the processor inside this smartphone. Some reports suggest an Exynos 9611 SoC which will not be a massive upgrade. Other details include a USB-C port, 3.5mm headphone jack, dual-SIM 4G, dual-band Wi-Fi 5, and Bluetooth 5.2. The device will run Android 11-based One UI 3.1 straight out of the box.

The device will go official in India on July 21st.