The microblogging service Twitter reported on its work in the second quarter of the current fiscal year. Significant growth was recorded in key indicators.

Licensing and other revenue streams generated a total of $ 137 million, up 13% from the second quarter of last year.

At the end of the quarter, the company posted net income of approximately $ 66 million, or 8 cents per share. For comparison: a year earlier, losses were recorded at the level of $ 1.38 billion, or $ 1.75 per share.

According to the results of the second quarter, the daily audience of active monetized Twitter users was about 206 million users. A year earlier, this figure was equal to 186 million subscribers, and in the first quarter of this year – 199 million.

In the current quarter, the company expects to receive revenues from $ 1.22 to $ 1.3 billion. Operating losses, calculated in accordance with generally accepted accounting principles (GAAP), could be up to $ 50 million. 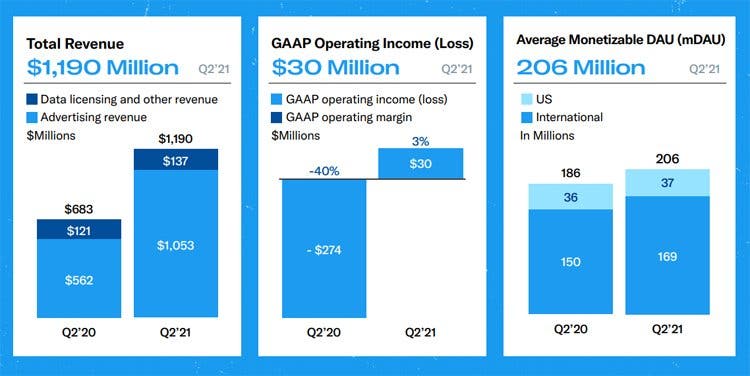 Twitter CEO Jack Dorsey, who has always been enthusiastic about cryptocurrencies in general and bitcoin in particular, said at the virtual conference The B Word that the new means of payment will help ensure peace on the planet. In his opinion, difficulties with the existing monetary system distract people from bigger problems.

According to Mr. Dorsey, bitcoin will help overcome financial inequality and allow humanity to focus on other, more important issues. “Hopefully this will create or help create world peace. All of these monopolies of ours upset the balance, man has no power, and the costs and distractions that come from our monetary system today are real, and they distract attention from bigger problems”.

“All these distractions that we have to deal with on a daily basis take away from those bigger goals that effect every single person on this planet and increasingly so. You fix that foundational level and everything above it improves in such a dramatic way. It’s going to be long-term but my hope is definitely peace,” the founder of Twitter adds; – quoted by Jack Dorsey CNBC.

However, the head of the head of Twitter did not limit himself to ideological theses alone. So, he confirmed to investors that Bitcoin will become a “big part” of the company’s future. Mr Dorsey sees real opportunities to integrate cryptocurrencies into existing Twitter products and services, including commerce, subscriptions and new features. He has not yet provided any specifics; but noted that, in general, he considers bitcoin one of the three key trends for Twitter; along with artificial intelligence and decentralization.

Previous Samsung flip smartphone with a rotating camera in the works

Next Fear of "Pegasus": French president, Macron, changes his smartphone and phone number