Xiaomi’s performance in the market has been a major topic of discussion over the past few weeks. Last week, a Canalys report shows the performance of the global smartphone market share in the second quarter. According to the report, Xiaomi’s market share hit 17% which takes Xiaomi to the second position globally. Today, another report from reputable market research, Strategy Analytics, reaffirms Xiaomi’s position as the second-largest smartphone brand in terms of shipment. The Chinese manufacturer is second only to South Korean manufacturing giant, Samsung. 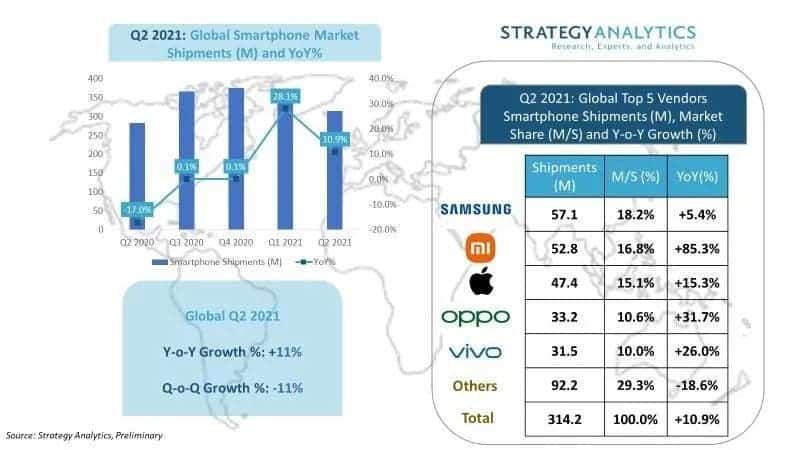 According to Strategy Analytics, the global smartphone shipments in Q2 2021 increased by 11% year-on-year to 314.2 million units. This is the second-highest annual growth rate in recent years (second only to 28% of Q1 in 2021). In Q2 of 2021, Samsung continues to maintain its leading position with an 18.2% market share. However, Samsung’s annual growth rate (increase by 5.4% year on year) is the lowest out of the top five vendors.

Strategy Analytics also believes that fierce competition and supply restrictions from Chinese manufacturers have affected Samsung’s performance in the quarter. For the first time in history, Xiaomi ranks among the top two in the world. Its global smartphone shipments are 52.8 million units and its market share is 16.8%.

Among the top five manufacturers, Xiaomi has the highest annual growth rate (+85.3%). Xiaomi quickly and successfully seized the aftermath of LG’s withdrawal in Latin America and Huawei in Europe.

Apple’s growth in China is significant

Furthermore, Strategy Analytics estimates that China has surpassed the United States as the largest single market for Apple’s iPhone in this quarter, the first time in history. The iPhone 12 series which supports 5G continues to be popular with loyal iPhone fans.

Chinese manufacturers Oppo and Vivo rank fourth and fifth with 10.6% and 10.0% market shares respectively. Both manufacturers have witnessed double-digit annual growth rates, mainly from China, India, and other overseas markets.

After the outbreak of the pandemic last year, most foreign markets were affected in Q2, while the Chinese market was affected in Q1. This is one of the reasons why Xiaomi achieved 83% year-on-year growth in Q2 this year. The other is that the demand for smartphones and smart devices in emerging markets has increased significantly after the pandemic. Xiaomi’s rapid advancement in these markets has captured the strong demand for cost-effective phones in these markets.

Next Huawei P50 series vs. iPhone 12 series: are these smartphones comparable?