The most popular benchmark in the world, AnTuTu, has again begun to rank the most powerful smartphones running the Android operating system. This time, the most powerful ones were determined at the end of July and among the devices that are available on the Chinese market.

On the first line of the rating, we have the Black Shark 4 Pro, which showed a result of 854,439 points and has been in the lead for several months. The second place was taken by Nubia Red Magic 6 Pro; which lagged behind the leader by almost 23 thousand points. “Bronze” was taken by OnePlus 9 Pro with a score of 822,338 points. All three leaders have the Snapdragon 888 hardware platform. As, indeed, the same chip is installed in all smartphones that entered the top ten most powerful smartphones in July 2021.

Fourth to tenth places were taken by Oppo Find X3 Pro, realme GT, OnePlus 9, Vivo X60 Pro +, iQOO 7, Meizu 18 and Xiaomi Mi 11 Ultra. Despite the fact that all smartphones received the flagship Snapdragon 888 platform and 12 GB of RAM; excluding the Black Shark 4 Pro and Meizu 18; the gap between the first and tenth place is almost 67 thousand points. 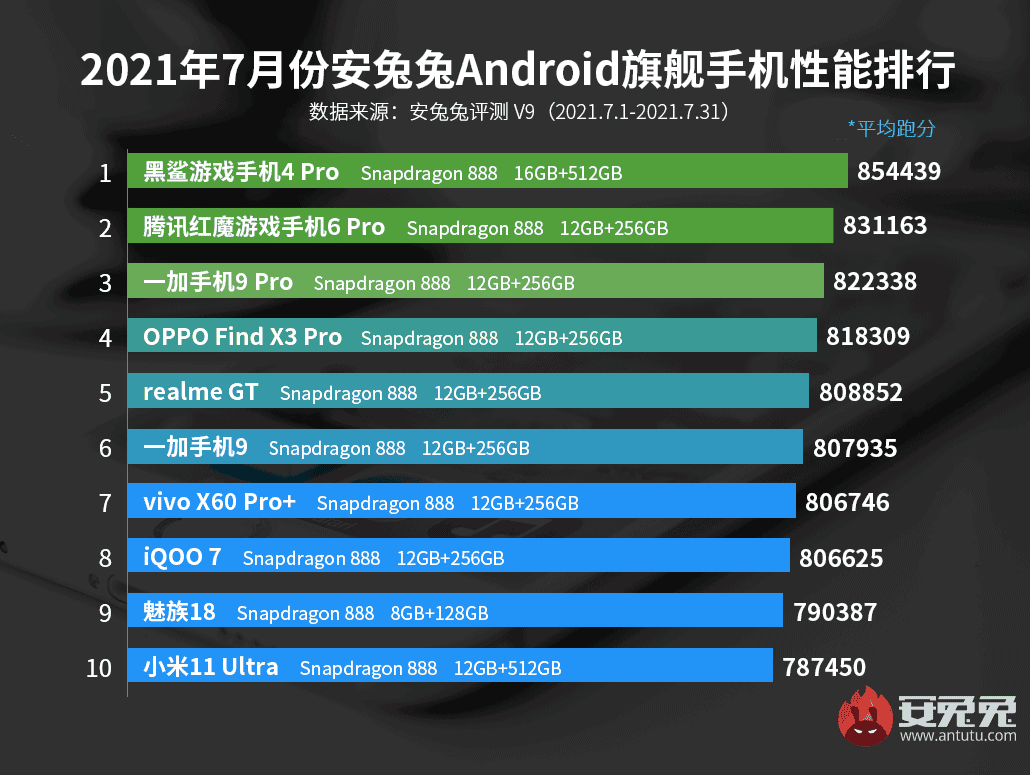 Back in May, Xiaomi Black Shark 4 and Black Shark 4 Pro were presented in China. Both models received a similar design, which deliberately demonstrates the gaming nature of the new products; and the most noticeable change compared to its predecessors was the redesigned main camera unit on the rear panel made of glass. It now looks more traditional and offers three symmetrically positioned image sensors. In place is the Black Shark 4 logo, which can glow in different colors.

On the front side of the Xiaomi Black Shark 4 and Black Shark 4 Pro, there is a 6.67-inch AMOLED display with FullHD + resolution (2400×1080 pixels), brightness of 1300 nits, with a refresh rate of 144 Hz and a touch input speed of 720 Hz. At the top of the screen there is a round hole for a 20 megapixel front camera; and this is not a typical solution for a gaming smartphone. I am glad that the “hole” is rather tiny with a diameter of 2.76 mm. The matrix itself is adaptive and adjusts the hertz pattern to the content that is displayed. But if you want, you can manually set 60 Hz, 90 Hz and 120 Hz.

The hardware platform of the Black Shark 4 Pro is the Snapdragon 888 chip; while the “regular” Black Shark 4 is based on the Snapdragon 870. The standard version has 6/8/12 GB LPDDR5 RAM, and the Pro has 8/12/16 GB. Both smartphones received 128/256 GB of permanent memory UFS 3.1; but the Pro version also has a modification with 512 GB. But the main feature is that a hybrid storage system is used; where an SSD works in tandem with UFS 3.1. This solution allowed to overclock memory and speed up the process of installing and loading games.

Next Real image of the Realme Flash appears online