Vivo introduced the Vivo X60 series in December in China as a last-minute launch. The lineup was composed of a Vivo X60, X60 Pro and X60 Pro+. The main devices came with Exynos 1080 SoC as a fruit of a partnership between the Chinese firm and Samsung. A couple of months later, the company introduced the global versions of the X60 and X60 Pro, and surprisingly, they left the Exynos 1080 in favor of a Qualcomm Snapdragon 870 SoC. Now, that several months have passed, the company is gearing up to introduce its Vivo X70 series.

The Vivo X60 already received a multitude of variants, but apparently, now it’s time for Vivo to put it to rest. The first rumors about the Vivo X70 series are emerging all around, and today we have the first consistent leak hinting at some of the specifications. We already know, that the X70 series will probably include vanilla and a Pro variant, there is also the chance of a Pro Plus variant. Today, a new Vivo handset which is speculated to be the vanilla Vivo X70 has passed through the Geekbench website.

According to rumors, the Vivo X70 series will debut in September 2021. As a result, we expect the leaks to start to intensify. Today’s leaked Geekbench listing reveals a Vivo smartphone with model number V2104. The device passed by the benchmarking platform with 12 GB of RAM under the hood and a MediaTek Dimensity 1200 SoC. The listing further reveals that the phone packs Android 11 straight out of the box. Therefore, we can expect the Chinese version to bear OriginOS. Meanwhile, the global variants will stick with Funtouch OS 11. 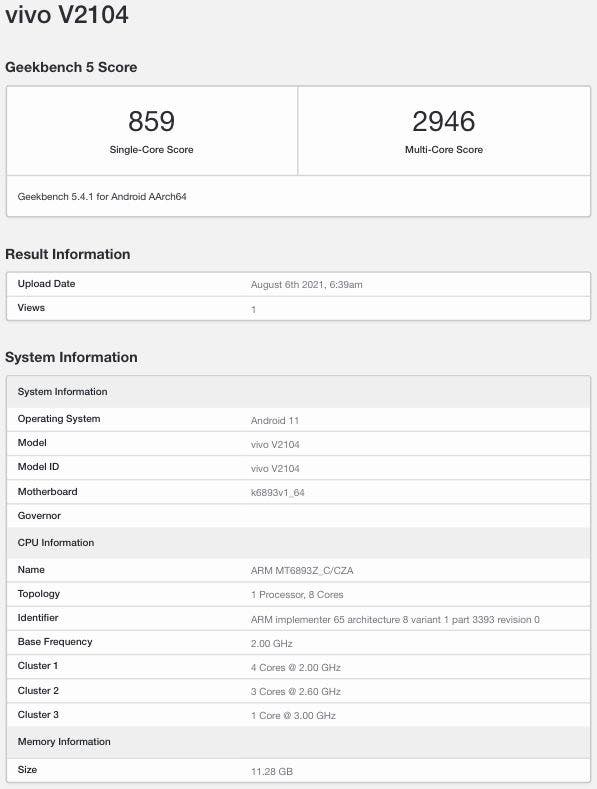 Unfortunately, the Geekbench listing is everything we have about the Vivo X70 at the moment. However, rumors for the upcoming Vivo X70 Pro+ have also emerged before. According to the info, the device will come with a sensor bigger than 1/1.28-inches. Further, the company will also keep up the partnership with ZEISS optics. The device is also said to debut Vivo’s first Image Signal Processor. As far as the performance goes, as the top device in the family, we expect it to come with Snapdragon 888 SoC, or even with the newer Plus variant.