Chinese telecommunications giant Huawei, according to network sources, is considering a smartphone with a flexible display that wraps around the surface of the body.

Information about the device was published by the World Intellectual Property Organization (WIPO). LetsGoDigital website presented images that give an idea of ​​the design of the device.

It is known that the smartphone will be based on a flexible POLED display on a plastic substrate. It is about the use of a special supporting mechanism based on magnets.

When fully unfolded, the smartphone will be able to function as a small tablet. A multi-module camera with vertical arrangement of elements will be located in the back of the case. The patent illustrations show three optical units, but the configuration could theoretically be different.

Alas, while the original smartphone exists only on paper. If it appears on the commercial market, the device may be called the Mate X Rollable. 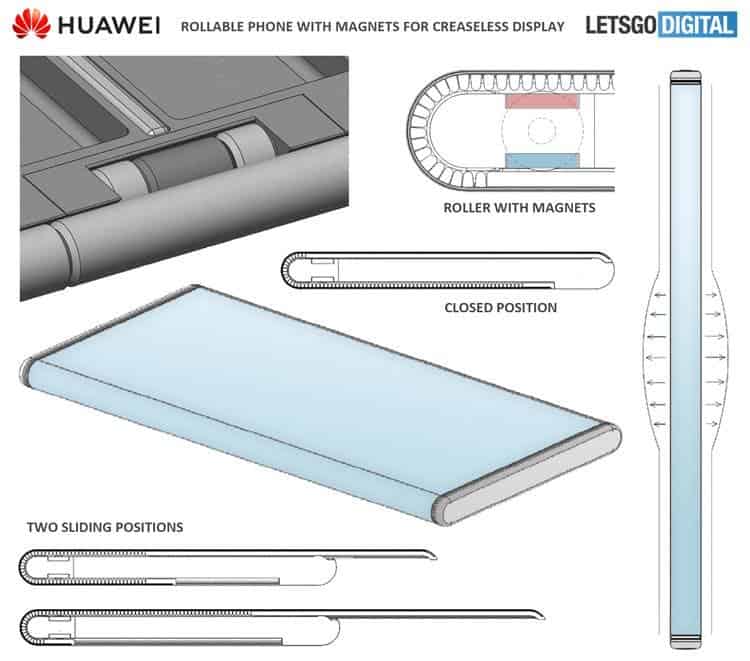 Chinese giant Huawei Technologies closed the week with a financial report for the first half of the year. If in the second quarter of last year the company was the leader in the global smartphone market; now it has left the top five for the first time in seven years. At the same time, revenue fell by about 30%, and in the segment of consumer devices, it even fell by 47%.

In absolute terms, Huawei’s revenue is still significant – in the first half of the year, the company received almost $ 50 billion in terms of the current exchange rate. The net profit margin compared to last year was able to grow from 9.2% to 9.8%, the company explains this by an increase in operating efficiency. Last year, the sale of consumer electronics, which includes smartphones, brought Huawei more than half of all revenue, but in the last half of the year, profile revenue fell by 47% to $ 18.6 billion, reflecting the company’s losses in the smartphone segment.

Negative dynamics was also observed in the segment of telecommunication solutions. Profile revenue fell by 14%, the company attributed this to a slowdown in the expansion of 5G networks in China. In the future, however, Huawei’s core business should return to growth, as the pace of 5G rollout in the PRC began to accelerate again last month.

The corporate segment of Huawei’s business, tailored for the implementation of complex projects in industry, showed an increase in revenue by 18% to $ 6.6 billion, and it was the foreign markets, not the domestic Chinese, that acted as the locomotive. Huawei’s positions are also strengthening in the cloud segment; where the company not only doubled its revenue in the first quarter; but also took 20% of the Chinese market for such services. Eric Xu, replacement chairman of Huawei Technologies, said during the half-year results announcement. “We have set strategic goals for the next five years. Our goal is to survive on a continuous basis. “

Next Honor has begun to rapidly regain popularity in China