After the separation from Huawei, Honor is trying to gradually gain a market share in China. Oppo, Vivo and Xiaomi, fiercely seizing a niche freed from Huawei, will also have to fight with the direct heir to the once one of the world’s leading smartphone manufacturers.

Honor intends to expand its presence in the mid-range and premium smartphone market. The $ 300 to $ 600 and up segments will experience a big shake-up amid intense competition.

According to Counterpoint Research, Honor’s position in the Chinese market hit a low in January, with the brand accounting for 5.1% of the market. In June, it increased to 8.4%. Nevertheless, the company is still far from the indicators of August 2020 – then the manufacturer managed to sell 4.55 million smartphones. In June, sales accounted for just over half of that number.

Nevertheless, Honor’s sales are growing at a rapid pace. In May, the growth was 39% in comparison with the previous month, in June – 27% in comparison with May. Honor owes its growth to its continuing good reputation with Chinese buyers and its state-of-the-art research and development facilities. According to the company, it retained 4,000 people while spinning off from Huawei, and CEO Zhao Ming even stated that R&D capability is one of its most valuable assets. Such statements have helped Honor to maintain its image as a company at the forefront of new technologies. This helped to gain part of the audience, at one time loyal to Huawei. 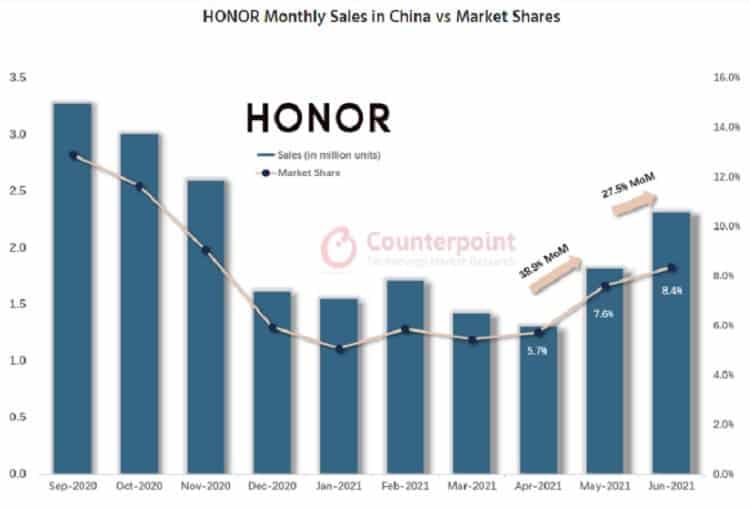 Honor has begun to rapidly regain popularity in China

Another success factor was the preservation of the network of suppliers and distributors. For example, the Honor 50 uses the Snapdragon 778G chipset not available to Huawei.

Another advantage is the shareholders, which include the country’s largest distributors of gadgets. This ensures that the new models are available to visitors to countless stores. Compared to many other Chinese manufacturers in this respect, Honor is in a much better position even now. The situation, by the way, illustrates the importance of retail sales channels in the PRC.

The good characteristics of the Honor 50 model also helped. According to the company, in the first minute of the start of online sales on June 25, smartphones worth about $ 77 million were sold; and the market share in the accompanying couple of weeks in China increased to 12%.

Models of the Honor 50 series cost in China from $ 309 to $ 618, effectively covering the needs of both the mass market and the middle, and even, in part, the upper price segments.

Due to the relatively small volume of shipments of new Huawei P and Mate smartphones, manufacturers still have a lot of chances to compete for the vacant niche. The winner in China has not yet been determined. Honor will change the landscape with the release of the Magic 3 in August.

Previous Huawei is developing a smartphone with a pull-out display