Realme is preparing a big global event for August 18th. In the next week, the company will reveal its Realme GT Master Series, new lifestyle and home products, and the long-rumored laptop. The Realme Book Slim will be revealed in India and Europe and the company is building hype for its upcoming release. The last round of spec teasers, confirms that Realme laptops will pack 11th generation Intel Core i5 CPU. The screen will also confirm to pack a 2K (2,160 x 1,440 pixels) resolution and will cover 100% of the sRGB color gamut. As far as the leaks are going, there will be a Realme Book and a Realme Book Slim variant.

Yesterday, Realme confirmed that it will also be bringing a new software solution with Realme laptops. The new Realme PC Connect feature will allow users to mirror the Realme smartphone’s screen on the laptop. The solution is similar to Huawei’s Share and Microsoft’s Your Phone. However, in counterpart to Huawei which uses NFC, Realme will probably use Wi-Fi Direct. For now, we don’t know if all Realme smartphones will be supported or just a specific number of devices. Both Realme Book and Realme Book Slim are confirmed to sport a sleek metal chassis, 65W charging via USB-C, and a backlight keyboard. 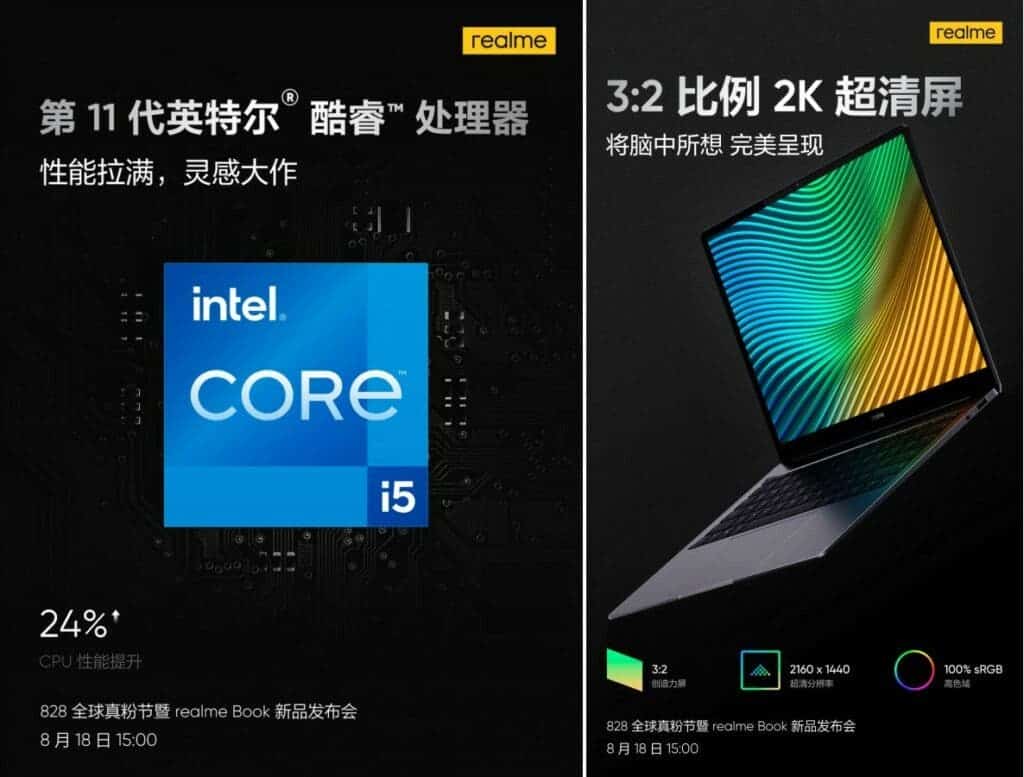 According to the leaked specifications, the Realme Book (Slim) will be featuring a 14-inch display. This panel will come with 2,160 x 1,440 pixels of resolution and will offer a peak brightness of 300 nits. The laptop will also come with blue light certification. Under the hood, the new slate will come with the confirmed 11th-gen Intel Core i5-1135G7 CPU. The laptop may come with up to 16 GB of RAM and 512 GB PCIe storage. Furthermore, it is also said that the Realme Book (Slim) will pack dual speakers tuned by Harmon Kardon. The device will also pack a microphone array, a backlit keyboard, and Windows precision drivers. Talking about Windows, the laptops should come with Windows 10 and be fully eligible for Windows 11 once they become available.

In terms of connectivity, the laptop will feature one USB 3.2 Gen 1 port, two USB C 3.1 ports, and a 3.5 mm headphone jack. Moreover, the laptop will come with a fingerprint scanner. The Realme Book (Slim) will have a 54Whr battery which charges via 65W fast-charging.

As per leaks, the laptop may weigh around 1.3 kg. As far as pricing is concerned, the Realme Book will cost around INR 55,000 in India.